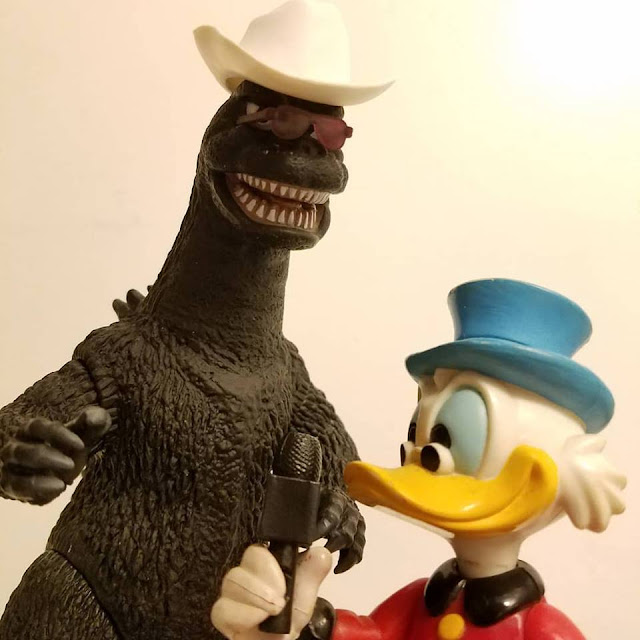 "First of all, I would to thank the many, many fans throughout this country that wrote cards and letters to Gawdzilla, the Monstah Island Dream, while I was down. Secondly, I want to thank Toho Company, Ltd  for waitin’ and takin’ the time ‘cause I know how important it was, Final Wars ’85, to the wrestling fans, to Toho Company, Ltd, and Gawdzilla, the Monstah Island Dream. With that wait I got what I wanted: King Ghidorah, the World’s Monsterweight Champion.

I don’t have to say a whole lot more about the way I feel about King Ghidorah! No respect! No honor! There is no honor amongst flyin’ three-headed space dragons in the first place!

He put hard times on Gawdzilla and his family! You don’t know what hard times are, daddy!

Hard times are when the Japanese defense force soldiers around this country are out of work, they got 4 or 5 kids and can’t fie-ah their giant lasuh cannons, can’t fly their fancy space planes!

Hard times are when the scientists and small boy helpers are out of work and they tell ‘em go home!

And hard times are when a man has worked at a job for thirty years – THIRTY YEARS! – and they give him a watch, kick him in the butt, and say “Hey, a kaiju just stepped on your place of employment, daddy.” That’s hard times! That’s hard times!

And King Ghidorah, you put hard times on this country by takin’ Gawdzilla out, that’s hard times! And we all had hard times together, and I admit, I don’t look like the kaiju of the day supposed to look. Mah belly’s just a lil’ big, my tail’s a lil’ big, but brutha, I am BAD and they know I’m bad.

There were two bad monsters… one was Gamera and he’s dead, brutha, and the other’s right here. “Monsta Zee-ro” King Ghidorah, the World’s Monsterweight title belongs to these people. I’mma reach out right now, I want you at home to know my hand is touchin’ your hand for the gathering of the biggest body of running, screaming people in this country, in this universe, all over the world now, reachin’ out because the love that was given me and this time I will repay you now. Because I will be the next World’s Monsterweight Champion on this hard time blues. Gawdzilla tour, ’85!

And King Ghidorah, Monsta Zee-ro… let me leave you with this. One way to hurt King Ghidorah is to take what he cherishes more than anything in the world and that’s the World’s Heavyweight title (the otha way is rippin’ his wings off). I’m gon’ take it.  I been there twice… this time when I take it daddy, I’m gon’ take it for you. Let’s gather for it. Don’t let me down now, ‘cause I came back for you, for that monster upstairs that died 10-12 years ago ‘cause of that Oxygen Destroyer and never got the opportunity to see a real Kaiju Champion. And I’m proud of you, thank god I have you, and I love you. I love you!