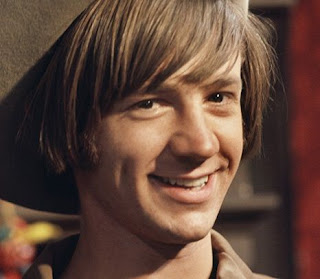 I was saddened to hear about the death of Peter Tork last week.  The Monkees were a huge part of my pop culture diet as a kid; I've watched the show time and again through countless rerun cycles and on DVD; I love their entire musical catalog, from the bubblegum pop hit factory days to their own material later on; my first proper concert was their 20th anniversary reunion tour stop in my home town; I even dig their weirdo movie Head... it makes no sense whatsoever but it's fun to watch them try to break out of their mold. And though Mickey may have always been my favorite Monkee, I think Peter was by far the most underrated and maybe the one I related to most.

A lot has been written about Peter being cast as the lovable goof and even "the dumb one." There's always an argument for the former, but I never agreed with the latter. It wasn't that TV Peter Tork was dumb (IRL Peter certainly wasn't), I always saw him as the most childlike. Trusting. Caring. Naive. Innocent.

Look at the Peter-centric episodes. Of course he's the one who gets taken in by a dance lesson scam. Of course he has trouble talking to the beautiful society heiress. Of course the devil(!) tries to steal his soul, and for nothing more than the ability to play beautiful music on the harp. In his way, he's the gateway character for the intended young audience. And although he chafed in the role as the series went on, he always played it very well.

And although it's really, really weird, I always loved his song "Your Auntie Grizelda." What can I tell you, folks... my first favorite song was "Fish Heads," my tastes have always skewed a little weird.