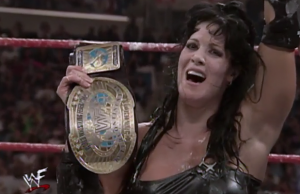 Joanie Laurer, better known to most as Chyna, died on Wednesday, and it's a damn shame to see another professional wrestler (or anyone, really) lose the fight with the demons in their life.  It's especially tragic because although she will be lauded and celebrated now that she is gone, she should have received her due when she was still here to enjoy it.

I'm as guilty of this as anyone, sadly, because although I saw most of her career in the WWE, I didn't pay as much attention as I probably should have, and did even less so in the years since as she bounced around the lower ends of the entertainment field.  And it's sad, because she was important for two reasons.


1.  She wasn't a sex symbol.  Women's wrestling in the US has been around a long time, but until the past decade or two it was usually just the breather match, the place on the card to go to the bathroom or get another hot dog.  And if you did stay in your seat, what you mostly got was a lot of slaps and hair pulling.  By the time you get to the 1990s and the WWF/E "Attitude Era," most of the women were no better than car show models, parading around displaying the miracles of modern elective medical science in their increasingly tiny tops, and if they wrestled at all it was in "bra and panties" matches where they'd be stripped to their skivvies while a salavating Jerry Lawler screamed "PUPPIES! PUPPIES! BWA-HLA-HLA-HA-HA!'

Chyna was different, though.  Chyna wrestled.  Chyna kicked ass.  Chyna ran with the boys.  Hell, for the bulk of her time in McMahonland she defended the boys, acting as the heater / bouncer / bodyguard for Shawn Michaels, Triple H, and the rest of D-Generation X.  She was mad, bad, and dangerous to know... if you messed with DX, you might have gotten a beating from the guys, but you would definitely have gotten one from Chyna.  And she continued to be an ass-kicker post-DX, twice winning the Intercontinental Championship (three times if you count when she and Chris Jericho were declared co-champions), the only woman to do so.  The reigns weren't long, but they're considered official and legitimately, understandably groundbreaking.

2. She was a sex symbol.  Bigger female wrestlers weren't a new phenomenon by the time Chyna happened onto the scene, but they were always booked and promoted as oddities, the side-sideshow to the sideshow.  They were big, they were fat, they were ugly, they were to be feared and looked down upon in equal measure.  Chyna was different.  She was certainly bigger than the other women on the roster at the time, but she was tough looking and muscular.  This invited a certain amount of "hurr, hurr, she's a dude" snickering at first, but that changed over time.

Admittedly, her looks were altered over time, too - she left the WWE with a bigger chest and smaller chin than when she had come in - and I'm sure that helped to a degree, but even still the overall effect marked a massive sea change for women in the wrestling world.  She was tall, she was muscular, she could put a hurting on you, but she was also - wait for it - a sexual being.  She was Eddie Guerrero's mamacita, master to the Kat's slave, and out in the real world even posed for Playboy.  A woman could be big and strong and still be sexy... given how many of the women in American professional wrestling at the time looked like exceptionally buoyant Barbie dolls, the importance of this cannot be undersold.


Her life before and after wrestling (and probably even during) was reportedly hard, and that's a damn shame.  She was billed in the WWE as "the Ninth Wonder of the World" (Andre the Giant being the eighth, for those keeping track at home), and that title was deserved in many ways.  It's just heartbreaking that it took this to make me realize that... maybe if we all had done so sooner, things might have gone better for her.

Say, Jim, that is actually a pretty decent outfit, wooooo!

DC's Rebirth is a-comin' down the pike in the next few months and the thing that most people are talking about (besides the fact that it's not really the rollback to the pre-New 52 DC Comics universe a lot of folks - maybe sometimes myself included - were hoping for) is that the Superman featured in all the press materials is the pre-reboot, married-to-Lois-and-now-with-a-kid Superman, the one we saw in Convergence and the Superman: Lois & Clark miniseries (info here, but probably some spoilers).  New 52 Clark seems nowhere to be found (this past week's Superman #51 has a big clue as to maybe why, and there are definitely spoilers at this link).  There will also be a Chinese man with Kryptonian-like powers getting a book called The Super-Man, and aforementioned Super Son will be getting his own spin-off book with the Damien Wayne Robin called The Super Sons (and his hoodie/costume looks all kinds of rad).

Now, I'm as curious as to the hows and whys and what nexts of all this as the next Comic Book Fan of a Certain Age, but what makes me happiest about this news is that it looks like we'll finally be rid of that New 52 Super-armor and in its place will be a Superman costume that more closely resembles the recent Henry Cavill movie uniform.
Though there seems to be some question as to how it will actually be colored, though:
But no matter.  While I still prefer something closer to the traditional, red trunks costume (as do most product licensors if the shelves at stories almost everywhere are any indication), this is a damn sight better than that godawful, clunky, priest-collared thing the Man of Steel has been wearing since 2011 and I can live with it because I thought the movie costume worked well and have been wondering when the powers of cross-platform synergy were going to finally take hold.

As for the comics themselves, I'll wait and see but I am cautiously optimistic.  I haven't enjoyed a lot of the New 52-era Superman books I have read (though the brief Geoff Johns / John Romita, Jr. run was decent, and #51 that I mentioned above was pretty good), but I liked what I have read of the Lois & Clark miniseries and I am absolutely loving the Superman: American Alien series from Max Landis, so I have hope that a more traditional, less mopey Superman is the four color panacea I've been hoping to see.  Time will tell, I suppose, but if nothing else it will be easier on the eyes.
at April 10, 2016 No comments:
Labels: comics, New 52, Superman
Newer Posts Older Posts Home
Subscribe to: Posts (Atom)