Remembrance of Rings Past 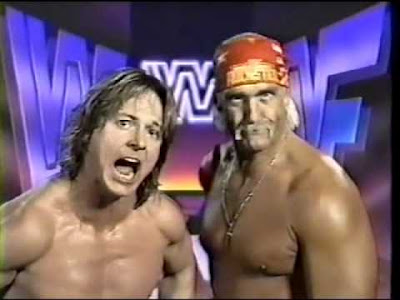 I became a huge fan of professional wrestling as a kid, and I was a fan of the World Wrestling Federation (now WWE) in particular.  The only problem was that I was living in Bangor, Maine, and though the then-WWF had come to my town sporadically before I discovered the world of sports entertainment, my particular golden age of wrestling fandom was something of a dry spell for live events in the area.  There were local, indie promotions that would put on shows at the fair and stuff, and those were fine, but what I really wanted the bigger-than-life people I was seeing on the USA Network.

As the 90s dawned, though, we started getting some house shows at last, and though my initial interest in pro wrestling was starting to ebb a little (I'd walk away and come back several times through the years), it was so exciting to hear they were actually coming that of course I had to go.  In the years since, I recalled having good times at those shows but didn't have many concrete memories of what happened beyond a few specific happenings, but I recently stumbled upon a site called The History of WWE, and among many other things it lists the results of both TV and arena shows throughout the decades.  My memories of the details are still a little hazy, and some of their listings are incomplete, but I was so excited to find them and relive these events that some specifics floated back to the surface.  Here are the listings from that site for the shows I got to attend, and a few reminiscences here and there where they fit:


WWF @ Bangor, ME - Auditorium - June 14, 1991
Flag Day
The Berzerker pinned Koko B. Ware at the 9 minute mark after dropping him throat-first across the top rope
The Warlord defeated Jim Powers (sub. for Kerry Von Erich) via submission with the full nelson at the 9 minute mark
The Big Bossman pinned the Mountie with the sidewalk slam at 6:15
Roddy Piper pinned Ted Dibiase with a small package after a low blow at the 9 minute mark
Greg Valentine defeated the Barbarian via disqualification at 6:30 after the Barbarian shoved the referee
The Bushwhackers defeated the Orient Express at 9:30 when Butch pinned Tanaka after Luke interfered behind the referee's back
Jim Duggan pinned Sgt. Slaughter in a flag match with the running clothesline; Virgil was the special referee for the bout


Oh, man, I was so excited for this show.  I was practically sitting in the rafters at the Bangor Auditorium but it was still so exciting to finally see these guys in real life.  Funny thing about Jim Powers subbing for Kerry Von Erich ("The Texas Tornado")... he was actually billed as Kerry Von Erich (sort of like how the WWF would later occasionally try and pass others off as The Undertaker, Diesel, and Razor Ramon).  It was hard to tell from where I was sitting (although he definitely didn't move the same way), but friends with better seats assured us that it was not the real deal in the ring.  Von Erich had a lot of problems going on at this point in life, though, would be gone from the WWF for good a bit later, and would be dead by 1993.

In better news, the Big Bossman (a 2016 WWE Hall of Fame inductee) was amazing... really astounding to see a guy that big move so agilely.  And Roddy Piper, oh man, so much fun in the ring and out.  Also, this was when Sgt. Slaughter had renounced the USA (and presumably GI Joe royalties?), hence the flag match with Hacksaw.  Many "USA! USA!" chants were shouted.


Oh, this show.  This is the one I remember best, and probably will my whole life.  First of all, IIRC, Phil Apollo was subbing for another wrestler who didn't show.  As the ring announcer stated this and introduced him, the entire crowd shouted "WHO?!" in unison.  It was funny and sad at the same time.

Now, the Beverly Brothers and the Bushwhackers... oh, man, this was tough.  Beau and Blake Beverly were very well-coiffed, manicured, neatnik, fancy-dressed, blonde guys, your classic "sissy heel" wrestling archetypes.  The Bushwhackers were rough and tumble toothless sheepherders from New Zealand.  In the midst of this long-standing feud between them, the latter would often make fun of the former and call them "the Beverly Sisters."  At this show, they stepped up their game by outright calling them, well, all manner of homophobic slurs, and they got the arena to chant along with them.  It was awkward, and ugly as hell.  I remember by buddy Cori and I looking at each other and saying "Hey, you know, this really doesn't feel right, and if there are indeed gay people here tonight" - yeah, we said "if," because we were 15 in central Maine and still didn't know how life worked - "I bet they're really uncomfortable right now."  It was one of those "Hey, I don't want to be that kind of person and also it wouldn't be the worst idea ever to move someday" moments that helps define who you are and how you want to be.

As for the main event, people were pissed that Warrior no-showed, but Roddy Piper coming in to sub was amazing.  He put on a hell of a show, went over the Undertaker in his own specialty match (and even then 'Taker was pretty much at a point where he didn't have to job to anyone he didn't want to), and made a hell of a lot of fans in Maine that day.  This was the day that, in my mind, made him one of the all-time greats.  Showing up and making you (as an audience or an individual) feel like you matter is huge, you guys.

Not a lot of info on this one, and I don't recall it very well, either, just that I was there...  I wish I did remember it better, because come on, Piper vs. Flair!

The last WWF show I went to as a kid, and I don't remember this one too well, either, except that it was the day we finally got to see Hulk Hogan.  As stated, this was when Flair was WWF champ, so we knew we wouldn't see the title change hands (because it was a house show... on a Sunday afternoon... in Maine), but I have to disagree with what the results say because I clearly recall that Hogan not only won, but it was by a pin count, he was declared "the winner... and NEW WWF World Champion" etc., handed the belt, and got to parade around the ring with it.  Of course, we knew that TV would never reflect this, and he'd either drop the belt again at the very next show, or else it would just never be mentioned again.  Not sure what the deal was... maybe there was some kind of shenanigans and I just don't remember it.

Regardless, this was the last wrestling show of any kind that I attended until seeing a Monday Night Raw live at the Centrum in Worcester, MA, in late 1999 (that's for another day).  By this time, my interest was starting to wane (as the era of the "everyone had a day job" gimmicks began, it all got too silly even for me), and apparently the WWF's interest in Bangor had waned as well because it looks like there were only 2 more shows and another long dry spell began.  But even if I was less excited by the overall product, the shows were all still incredibly fun... sitting in the crowd, cheering the babyfaces, booing the heels, and buying into the questionable reality of it all even for just a few short hours, it's an experience that's hard to beat.  Professional wrestling is the closest thing real life comes to superhero comics; how could I not love it?
at March 24, 2016
Labels: life, nostalgia chow, wrestling