Man of Plastic! Or maybe The Brick Knight Returns! 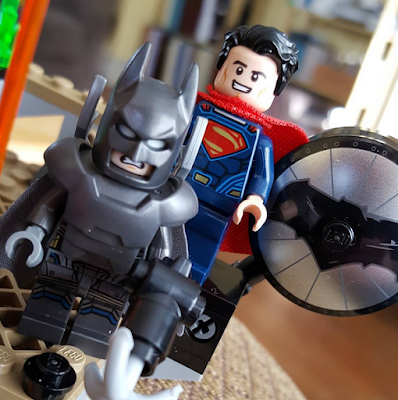 I liked Man of Steel well enough (it fulfilled my biggest criterion - not being Superman Returns), but it did have its flaws and the unrelenting ramped up grimness as the movie approached its climax has kept me from going back to rewatch it since my initial viewing.  If the ad campaign for Batman v. Superman: Dawn of Justice is any indication, that same grimness is getting increased exponentially (as the lighting budget decreases same), even with the addition of eleventy hundred other heroes and villains.  I plan on seeing it, because I do like Henry Cavill as Superman and I want to like Ben Affleck as Batman and Gal Gadot as Wonder Woman (and more Lawrence Fishburne and Amy Adams as Perry & Lois can only be a good thing), but I'm approaching it with a certain trepidation.

That being said, this Lego set, #76044, "Clash of Heroes," was a must-buy.  The Kryptonite is useful, and that Batsignal is great, but the minifigures really sell it.  Frank Miller-esque end of "Dark Knight Returns" armored up Batman? Sure.  Superman in a costume that's light years better than any of his New 52 togs, and a new hairpiece to boot?  Yes, please.

Also, the fact that it's a Batman v. Superman: Dawn of Justice minifig that gives us the first Lego Superman head that's not only not-glowering, but full-on smiling (the other side features a presumably-more-movie-accurate heat vision eyes & snarl combo)? Irony like that is too amazing not to support.
at February 07, 2016
Labels: Batman, lego, movies, Superman