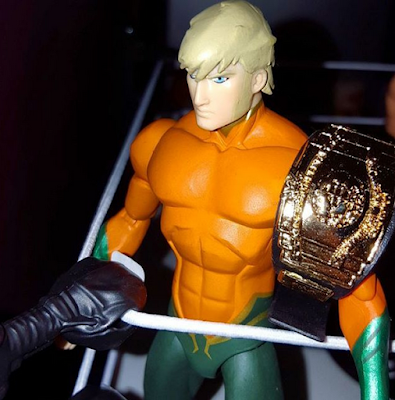 Arthur was occasionally dismissed by the everyday audience, but he had a large and vocal following among "smarts" in the internet crowd, the kind of folks who are more impressed with technical skill and workrates than by repeated catchphrases.

He might have a hard time rising above the midcard, but that's where many of the most interesting feuds and most of the best matches take place, anyway, and more than once he and his opponents ended up stealing the show (that brother-against-brother angle with Ocean Master, for instance, and the ongoing war with Black Manta that has stretched out over both mens' entire careers).

Occasionally he'll become a player in the World title picture, and every time things start out strong but eventually peter out due to questionable booking decisions (usually all backstage politics by the bigger names worried about their spots) and weird attempts at changing up his gimmick.  It's the hunt for the Intercontinental title - and minor variations on his old school persona - that best suits him and the fans.

That contract stipulation about only having to defend the championship in coastal cities sure is weird, though.
at February 11, 2016
Labels: Aquaman, comics, Fantasy Booking, Just kinda weird, wrestling