The "Best of 2015" List That No One Demanded But, Hey, You're Getting Anyway

Every year the greater pop culture universe serves us up things to hopefully enjoy, and thankfully 2015 was no different.  Here's a list of a dozen things that particularly resonated with me last year.

The Announced Return of MST3K  / Mystery Science Theater Weekend - Probably weird and unfair to start with this because half of it is super region-specific, but no matter.  A local theater hosted two nights of MST3K goodness back in the fall, including screenings of favorite episodes and shorts, Joel Hodgson's one-man show "Riffing Myself," and Q&A sessions with the Gizmocrat himself.  It was an amazing couple of nights spent laughing my head off in the company of lots of other MSTies, and it is one of the most truly satisfying experiences in the world when you meet one of your true idols and he's just everything you could hope for him to be.  He dropped a few vague hints about the possibilities of a revival, so the Kickstarter wasn't a complete surprise, but each subsequent announcement and the eventual results (that cast, the biggest Kickstarter-funded media project ever, 14 new episodes instead of just the hoped-for 12) turned out to be mindblowing. 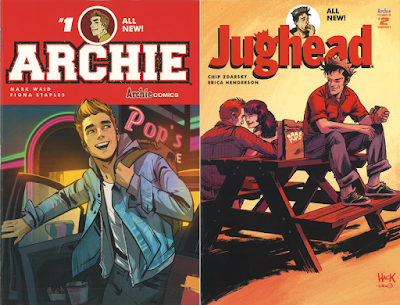 The Archie and Jughead reboots - Archie Comics did a lot of things in the last 10-15 years to shake up their staid image - manga-style Sabrina, the teen soap opera-styled "new look" stories, Kevin Keller, future "married to Betty/Veronica/Valerie" stories, Archie & Sabrina horror books, etc. - but the recently relaunched Archie & Jughead books might be their best, most interesting efforts yet.  All of the characters & situations are still recognizable, but the gag-oriented stuff is gone in favor of slice-of-life storytelling; quirky slice-of-life, granted, but still.  The "murderer's row" of talent doesn't hurt, either... you see names like Mark Waid, Fiona Staples, Annie Wu, Chip Zdarsky, Erica Henderson, and more on a book, you expect good things, and these don't disappoint.  And for those who still enjoy and/or miss the old-style stories, every issue so far has reprinted original stories from the 40s.  Both books are near or at the very top of my pile whenever they come out, and are honestly some of the best comics produced right now. 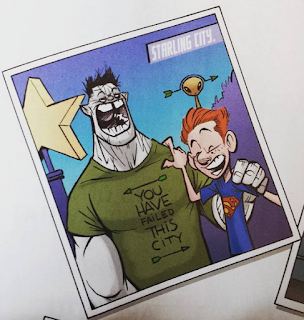 Bizarro - After 3+ years of mostly Grim'NGritty New 52 stories, the book was a real breath of fresh air and unquestionably my favorite thing to come out of the recent DCYou soft re-re-(re?-)relaunch.  Basically it's the perfect buddy comedy road trip story, but it just happens to involve superhero sidekicks, imperfect duplicates, maniacal used car dealers, ghost cowboys, aliens, magic, and a (presumed) chupacabra.  Sure, there's lots to tie it to the DC Universe, but you can come in cold and still enjoy the story a lot.  I was not familiar with writer Heath Corson nor artist Gustavo Duarte before reading this, but I'll keep an eye out for both in the future. 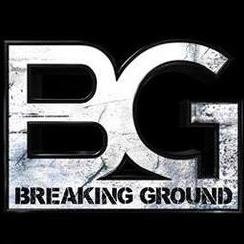 Breaking Ground - NXT has been one of the best aspect of the many-headed WWE beast for a few years now, and it has been fun to see it grow from the outside.  The WWE Network series Breaking Ground allows us to see that growth from the inside as we follow a wide array of wrestlers, trainers, and company execs through the past year, in which NXT transformed from WWE's minor league developmental program into a starmaking, compelling wrestling program/brand in its own right.  Even if you know a lot about pro wrestling in general or WWE in particular, this kind of access and insight is rare.  In our house, NXT has long-since eclipsed the main roster WWE shows like Raw and Smackdown to become our wrestling show of choice, and Breaking Ground goes a long way toward explaining how that happened. 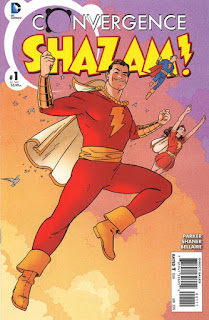 Convergence: Shazam - The "let's get out all our toy & make 'em fight" Convergence event mostly left me pretty cold, but a few of the tie-in minis were fun.  Blue Beetle, Booster Gold, and Superboy & the LSH series were fun, but the Shazam book was hands down my favorite, and maybe even my favorite comic all year.  The company line at DC seems to be that the traditional versions Marvel Family won't work within a modern context, hence all that Old Man Billy / Dominatrix Mary / Captain Long-Haired Freddy / Hooded Jerk Billy stuff.  But then you get this book (and it's spiritual predecessor, 2014's Multiversity: Thunderworld Adventures by Grant Morrison & Chris Sprouse), which proves that just because the heroes have a more innocent and childlike sense of justice (because they're, you know, children), it doesn't mean that they can't deal with the monsters (literally, in this case).  Jeff Parker, Evan "Doc" Shaner, and Jordie Bellaire were the perfect creative team for this series (as they were for Dynamite's Flash Gordon book a little while back), and I would love to see them back on these characters on a regular basis. 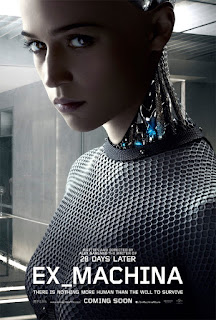 Ex Machina - It's slow, and quiet, and ponderous, and it asks a lot of big questions about how we define life, consciousness, feelings, and life itself.  To say any more than that runs the risk of spoiling it, so I'll leave off there, though I do want to add that I hope Alicia Vikander is treated well as awards season gets underway. 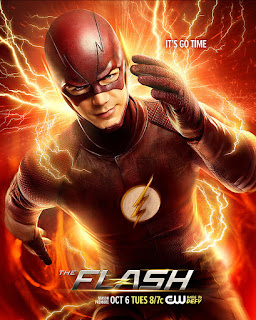 The Flash - Simply put, the best broadcast TV comics-based TV show on the air right now.  The cast is excellent, the characters are well-formed, all of the relationships and interactions are solid, logical, and believable, and for a CW budget, everything looks really good.  But also, we're getting a weekly episodic TV show where things like Earth 2 and Gorilla City are dropped into the plotlines like they're the most natural thing in the world and they totally work.  Pardon me for going all Dr. Pangloss here, but truly we live in the best of all possible worlds. 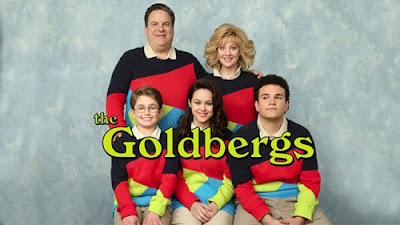 The Goldbergs - I had sort of dismissed this out of hand as another nostalgia-based vanity project, but I sort of stumbled upon this a few months back and was impressed by the chemistry and likability of the cast, the just-the-right-amount of warmth and good feeling, and the fact that not only are there numerous, legitimately laugh-out-loud funny moments in each episode, but that they're doled out pretty equally among the characters so that everyone gets their shot at being "the funny one."  Also appreciated is the fact that every episode is said to take place in "1980-something," so it gives all of the stories that "foggy memory" sort of feel and you therefore don't get hung up on any anachronisms in the setting, like playing NES while eating Pac-Man cereal and listening to Beastie Boys tracks. 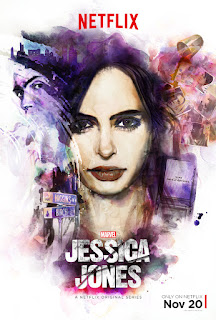 Jessica Jones - Netflix's Daredevil almost made this list, and is very good, but then Jessica Jones came along and knocked it out because as good as Daredevil was, Jessica Jones was that much better.  The subtle use of the characters' super powers was one of the show's greatest assets, and if you took those powers out of the mix completely, it would still work - Jessica and Luke would still be damaged but resourceful, Kilgrave would still be a manipulative prick, etc.  It also helped that the non-powered characters were just as interesting as the "specials" - Trish's need to armor herself, Robyn's inability to deal with the world, Malcolm's recovery, and Hogarth's increasingly messy divorce all added to the story rather than distracting from it. It wasn't a superhero show, it was detective show with powers.  And despite the single-character title, it was a hell of an ensemble. 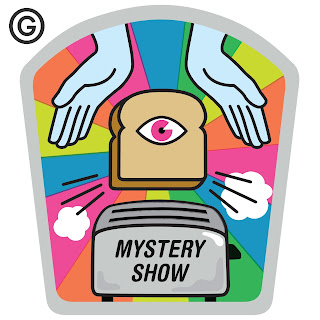 Mystery Show - I wrote about Mystery Show a while back, and anything I'd write about it now would just reiterate what I said then so I'll save you the time, but I would like to add that I hope it comes back soon. 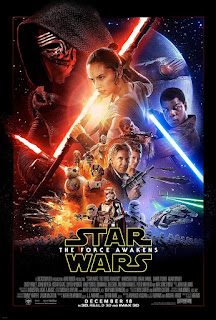 Star Wars: The Force Awakens - As I said after I saw it last month, yes, that will do nicely.  Also, I have to admit that I like it even more now after George Lucas made that noise to Charlie Rose about selling his "kids" to "the white slavers" at Disney, if only out of spite.  It's no secret that George has grown increasingly out of touch with what made his creation so well-loved in the first place, but a doughy white billionaire comparing anything to slavery after cashing that $4 billion check from Disney... yeah.  On the one hand, thank you for Star Wars and all, George, but on the other hand, fuck that guy. 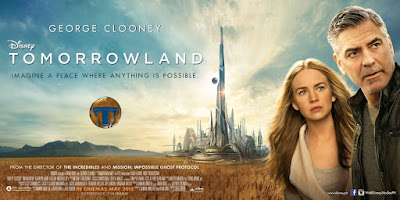 Tomorrowland - Tomorrowland failed to connect with a lot of people, sadly, but I loved it.  Not only was it visually stunning, but in times as dark and cynical as we live in now, I think the movie's message of hope for tomorrow, imagination, and the idea that people trying to better the world can make a difference is an important one... though I suspect that cynicism is exactly the reason why it didn't catch on as much as I felt it should have.
at January 11, 2016
Labels: Archie, best of the year, bizarro, Captain Marvel, comics, movies, MST3K, NXT, podcasts, Shazam, Star Wars, The Flash, TV, wrestling