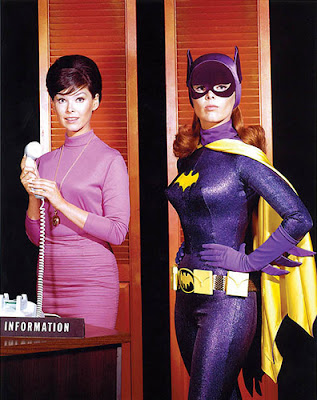 I'm late getting to this, but a sad farewell to Yvonne Craig... she starred opposite the Bat, the King, and the Kirk (two Kirks, actually... James T., sure, but also Tommy Kirk in Mars Needs Women), and held her own every time.  More importantly to my profession, she was probably the first and greatest Pop Culture Librarian of all, and she will be missed.  Rest in peace, Ms. Craig, and thanks.

And to finally answer the musical question, whose baby was she? 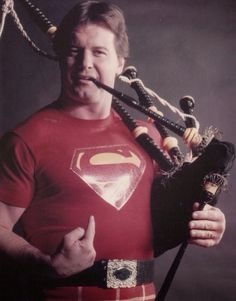 I don't know if there was an easier person in my childhood to hate than Rowdy Roddy Piper, and I loved him for it.

He was arrogant, malicious, cocky, and just downright mean.  He smashed a coconut on Superfly Jimmy Snuka's head, he smashed a Cyndi Lauper record on Captain Lou Albano's head, he led the bad guys in the Hulk Hogan cartoon (and years later would train a new generation of bad guys as one of Destro's Iron Grenadiers), and he ruined the video for "Land of 1000 Dances":

No doubt about it, he was a bad dude.  But then, as wrestlers are wont to do, he went away for a bit and came back as a good guy and my feelings turned on a dime.  I cheered him just as passionately as I used to boo him.  I think this is when I realized just how good a performer this guy really was, and why his (all-too-brief) stint as an action star made perfect sense... like him or hate him, you had to watch the man when he was on your screen.  He demanded your attention and then earned the right to keep it.

I'm gutted that I never got to meet him in person.  I had always hoped to shake his hand and tell him how much joy I used to get from just completely hating him... he seemed like the kind of guy who would really appreciate that.

Thank you for the good times, Hot Rod.  When we thought we had all the answers, you changed the questions.

And wherever you are now, they better hope you don't run out of bubblegum.
at August 02, 2015 No comments:
Labels: my childhood is dying off in great big chunks, RIP, Rowdy Roddy Piper, wrestling
Newer Posts Older Posts Home
Subscribe to: Posts (Atom)