Sarek and Amanda; or, What's so funny 'bout Infinite Diversity in Infinite Combinations?

I think that the enduring appeal of Star Trek, particularly the original series, is the unbridled and completely unironic just-post-Kennedy-era optimism (just before the rest of the 60s would beat it down), and the way it embraces and embodies a philosophy the series would eventually attribute to the Vulcans: Infinite Diversity in Infinite Combinations (IDIC).  IDIC is about celebrating what makes us different rather than shunning and eventually destroying it, and seeing all that we can achieve if we just get over ourselves, get our shit together, and get to work.  It's a nice thought, a beautiful sentiment, one that helps get me through troubled times.

One of my favorite expressions of this philosophy in the entire series is the relationship of Spock's parents, Sarek and Amanda.  We only ever get a few brief glimpses of it, and the explanation of what brings these two together is never really touched upon (at least not officially... I'm sure it comes up in the spin-off media at some point, and we get a brief discussion of it in the first of the Abrams Trek movies), but what we do see is remarkable.  Vastly different in terms of point of view, disposition, philosophy, and yes, biology, but when you see them together there's no question they belonged together.  The way they looked at each other, spoke with each other, and especially touched - that way where they wouldn't hold hands but instead touched their index and middle fingers together - it's all there in the performances of Mark Lenard and Miss Jane Wyatt (as she was sometimes wonderfully billed).

Kevin Church and Ming Doyle made a fantastic comic called "The Truth" for the Trek fanzine To Boldly Zine (which can be read in its entirety here) in which they theorize how it is that these two remarkable characters came together.  It's sweet, it's true to the original performances, the characters themselves, and the world they inhabit; best of all, it shows that tightly controlling (or, alright, suppressing) emotions is a lot different than not having them at all, which is a mistake I think a lot of writers make with Vulcans.  So read it, enjoy it, absorb it, understand the amazing people who helped make Spock the fascinating character he was, and make it part of your Trek head canon along with the Diane Duane Romulan novels, Marvel's Early Voyages series, and some of the better issues of the first DC Comics run (you know, for instance). 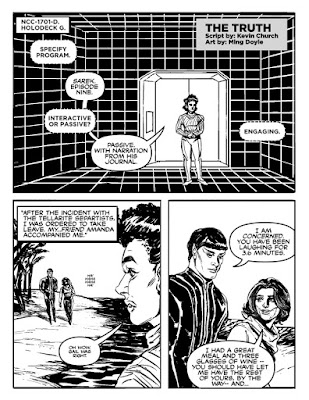 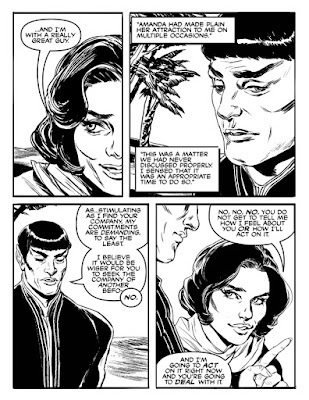 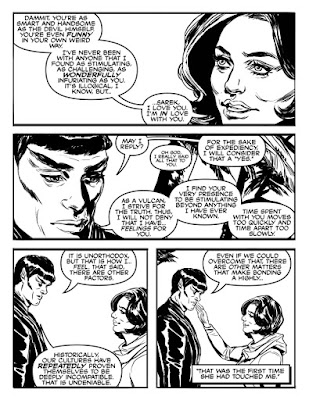 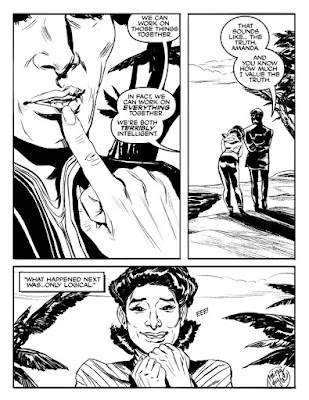 Thanks to Kevin for permission to run these.  Be sure to check out his great original series Tumblr site, They Boldly Went.
at June 22, 2015
Labels: comics, Star Trek