Starman: Bricks Past (or maybe Building With David '15) 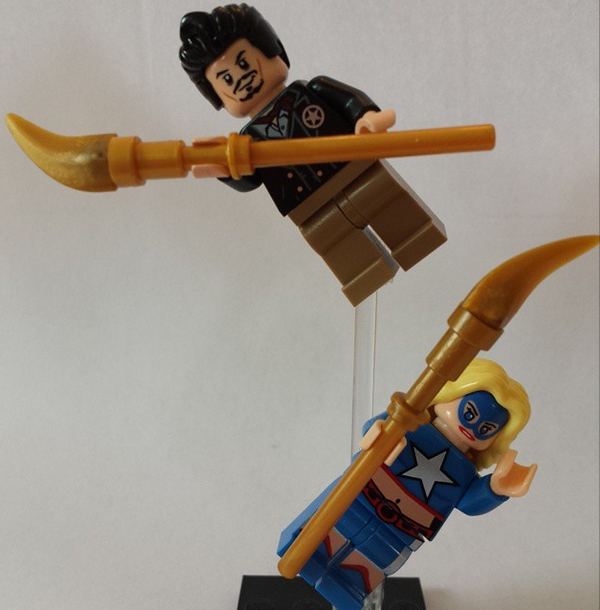 The fine (if legally and morally questionable) folks at Sheng Yuan, purveyors of slightly-off-model but mostly pretty good Lego knockoff bootleg compatible minifigures recently made a figure of DC Comics character Stargirl, though she was packaged as part of a Captain America line (because "Research? What research?") and came equipped with a shield and gun.  As a fan of the character (who is awesome in the Lego Batman 3: Beyond Gotham, btw), I felt the need to equip her properly, so I built as close an approximation as I could of her cosmic energy staff.

And then I remembered, oh yeah, the 1995-2005 Starman series by James Robinson et al. is my favorite DC series ever, and Jack Knight is in the top tier of my favorite comics characters ever, so making him became a priority.  A Lone Ranger torso, Tony Stark head, pompadour, tan legs, and one more cosmic staff later, and I was pretty happy with the results.  The torso isn't exactly right, but close enough for government work and it looks a lot better than any homemade decal attempt would.  Now all I need is a proper set of tank / night vision goggles for him.  I'm eyeing these ones from Brick Forge, so long as they'll fit over the hair piece.