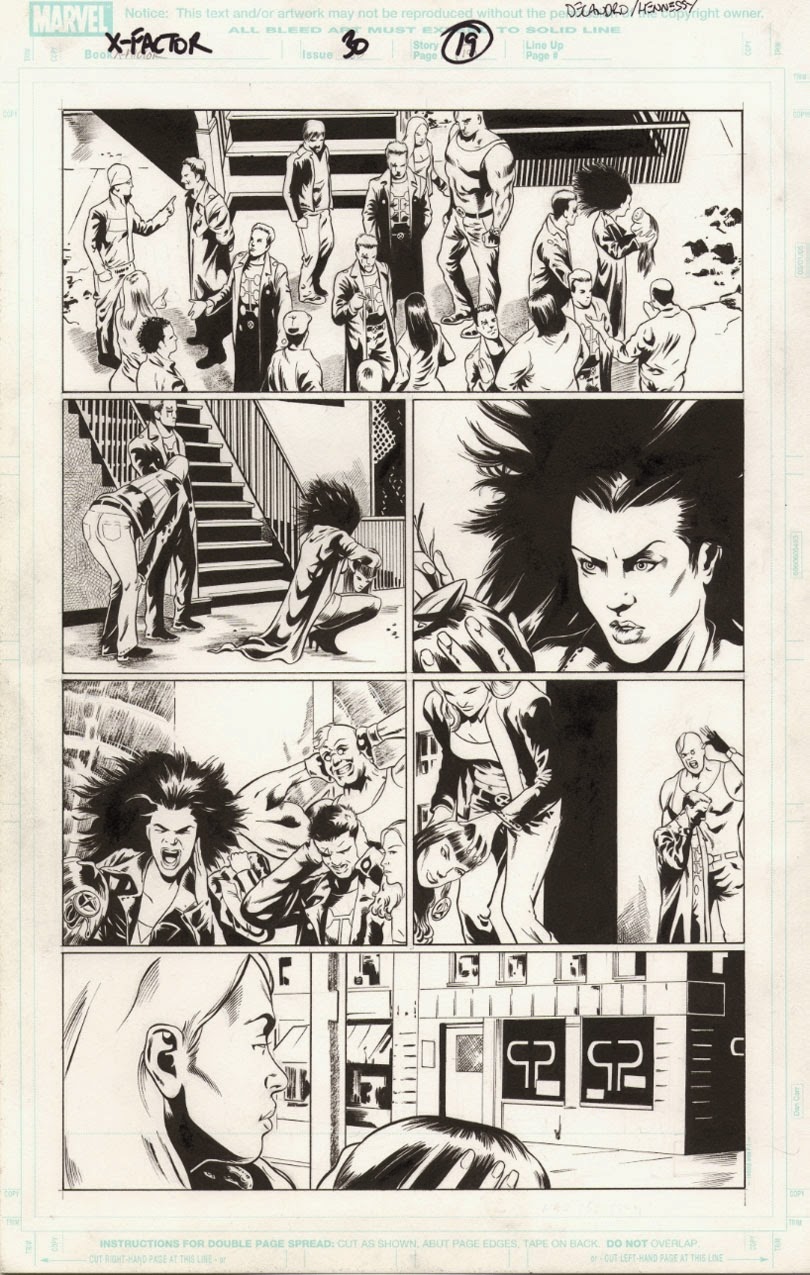 I wrote a little while ago about my unabashed love for Peter David's X-Factor, so when the opportunity presented itself to buy original art from the series (and at a price I could swing), I had to jump at it.  This page by Valentine De Landro (with inks by Andrew Hennessy) is a beaut... you have Jamie Madrox (my favorite character from the series) using his powers, the usually immaculate M in a state of comedic dishevelment, robots, and some great reaction shots from others in the cast.

Yeah, this one's a keeper.  Thanks to Ruben at Comic Book Art Gallery for helping to put this in my hands.  I promise to give it a good home.
at March 19, 2015 No comments:
Labels: comics, Pretty Sketchy, X-Factor

Less killing, more jokes (some thoughts on the Batgirl cover and other recent DC moves)

Credit where it's due to DC... they're awesome at pushing people's buttons.

In case you missed it, the latest thing (in what seems like a long, long chain of events) was a solicited cover for Batgirl featuring the Joker with his arm around the title character, looking terrified, crying, and severely traumatized.  The cover (which I won't post here) was one of many to be released as part of a line of variant covers celebrating the anniversary of the Joker's creation and harkened back to Alan Moore & Brian Bolland's Batman: The Killing Joke. This is a famous one-shot story from the 80s examining the Batman and Joker's relationship, and also features a scene where Joker shoots Barbara Gordon in the gut (ending her Batgirl career and causing her to be paralyzed, strips her, takes pictures of her crying and naked, and maybe rapes her.  Both Moore and DC editorial have always insisted that he didn't, but it sure as hell reads like he did and even if he didn't it's still a crime of sexual assault.

So yeah.  A cover harkening back to that.  On a book that has rather famously rebranded itself as an upbeat, fun superhero series.  Poor taste AND out of place... they really hit the Daily Double there.

The cover has since been pulled - by its artist, Rafael Albuquerque, no less, not by DC editorial decision - due to threats of violence caused in the wake of the online discussion about it.  Not threats against Albuquerque or anyone involved in its creation, mind you, but against people online who said they didn't like it, because internet people have this habit lately of being among history's greatest monsters.  Gah.

I'm of two minds on this.  For one thing, it was a variant, not the main cover, and therefore the sort of thing that people could easily opt not to by and that retailers could outright refuse to stock.  It was just as much DC's right to publish it as it was someone's right to not buy it.

That being said, I'm pleased it's being pulled.  Albuquerque is an incredible artist and if his intention was to provoke an uneasy reaction he succeeded.  But as I said above, I thought it was in poor taste, and in the interest of full disclosure, I hate The Killing Joke and what it tried to do to the character of Barbara Gordon.  That other writers were able to come along, recreate her as Oracle, and build such a strong character from the ashes of the slash & burn technique applied to her is amazing.  I find it unfortunate and downright distasteful that in her current continuity the Joker's attack remains but her time as Oracle has been retconned away, but that's a rant for another day I'm sure.

Finally, it's awful that anyone on any level got threatened because of a damn comic book cover.  Get your act together, comics internet.  That's Gamergate-level bullshittery there.

All this comes on the heels of last week's announcements of the changes coming down the pike to Wonder Woman (armored), Batman (also armored, and kind of a bunny?), and Superman (Springsteen album cover), which also had people all kinds of worked up and resulted in a lot of threats and bruised feelings on the Twitters, particular in regards to Wonder Woman.  To weigh in on those (which is required under Comics Internet Law): Wonder Woman's armor makes a sort of sense though it's too busy and I actually prefer her initial DCnU look; Superman's look was slightly easier to take once I realized the red on his hands was wrapped up cape and not blood, but I still thing superheroes in street clothes is dumb (though I totally dig the Fleischer cartoon-styled S shield); and Bionic Bunny is just silly.

Maybe there are story-driven reasons for all of these, and maybe they'll even be really good.  But if you're trying to promote Big New Changes and just present more of the same stuff that people found off-putting  in the first place, that's not going to inspire many people to give it a chance.

Of course, compared to this latest flap, merely having my aesthetic senses offended seems almost quaint, and much easier to take.  Were I of the tinfoil hat conspiracy theory bent, I'd wonder if maybe that was the plan all along.

Regardless, we're all talking about them now, and that was definitely the plan all along. Button-pushing to this degree may not be a good thing, but that they are good at it cannot be denied.
at March 17, 2015 No comments:
Labels: Batgirl, comics, DC, ranting 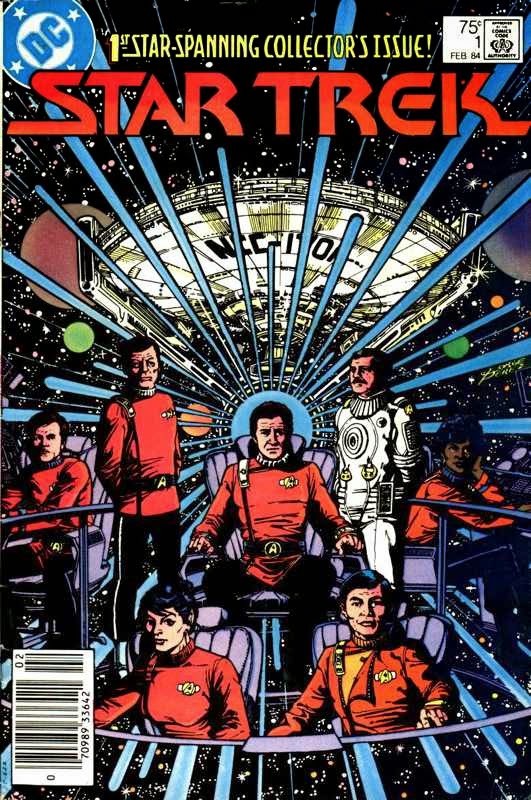 A while back I acquired this DVD-ROM collection of ever Star Trek comics published between 1967 and 2002 and I'll pick through it it every now and then. In the past year I started chipping away at DC's first (1984-1988) series, and in the wake of Leonard Nimoy's passing I've started really powering through the issues I have remaining.  I'm enjoying the hell out of it, and there's an argument to be made that not only is this the best Trek comic ever published, but it's one of the best licensed comics series of any franchise ever, produced by any publisher ever.


Licensed books can be tricky, because even when they're good, they rarely feel groundbreaking because the licensee needs to keep the licensor happy at all times, and the latter usually (and understandably) has a long list of requirements that need to be met so that the comics produced resemble the original product.  This is why a licensed title like, say, Doctor Who may occasionally be pretty good, but books like Silver Surfer or Ivar, Timewalker end up being much better Doctor Who stories. The creators of these comics have more freedom to explore concepts in greater depth and/or with greater consequences, while the actual Doctor Who writers have to turn in something that closely resembles the show's weekly continuity.

The '84-'88 Star Trek has some of these limitations, of course, as it begins just prior to the release of The Search for Spock and quickly has to make allowances for the plot points introduced in the course of that film.  A similar course correction happens as the writers have to tie up plotlines concoct a way to get the main cast back on Vulcan just prior to the release of The Voyage Home (this is the point I'm at now in my reading).

In between, though, you have a book brimming with creative energy, one that takes the familiar aspects of the franchise and the situations they had been left in by the films and takes them in interesting directions.  No Enterprise?  No problem! Kirk and crew earn their way back into Starfleet's good graces (barely, and thanks in large part to the help of an Andorian journalist) and is re-assigned to Excelsior for a long shakedown cruise, earning enmity from and making a foil of Captain Styles, Excelsior's previous, pompous captain seen in TSoS.  Spock has been revived, but they can't really use him much for fear of not knowing what the plans for him were in TVH, so he gets his mind back and is promptly given a science vessel of his own (and the occasional guest shot).  But Saavik has been waiting in the wings since Wrath of Khan, so she slides into the Science Officer spot, gets a lot more backstory, and becomes our "outside observer of the human condition" character.

Speaking of character development, that's where this book really sings.  We get a good amount of time with each of the main cast (everyone gets a spotlight issue sooner or later... Diane Duane's issue focusing on Dr. McCoy is the best of the bunch), and they get fleshed out as much as they can, but things really pick up with this series' original characters, such as: Konom, the Klingon who objects to his people's violent natures and defects to the Federation; Nancy Bryce, an ensign whose father was killed by the Klingons, and she is forced to confront those feelings as she falls for Konom; and Bearclaw, a Native American initially bigoted against pretty much any other species or person he encounters.  And then they go a step further by filling out the cast even more with extra-canonical fans may recognize, like Arex and M'ress from the Filmation cartoon series, or Naraht, an upbeat and earnest young Horta serving in the science division, who originally appeared in the novels.

Storywise, it's as much of a mix as the TV show ever was, very true to the original series's anthology nature.  There are big sweeping epics and smaller personal tales, deadly serious stories and comedic yarns... it runs the gamut.  Not every issue is a masterpiece, but it hits more often than it misses.  My favorites so far have been The Mirror Universe Saga (#s 9-16, and later collected in a trade paperback), a sequel to the TOS episode "Mirror, Mirror" and Double Blind (#s 24 & 25), a comedic story in which two races try to hijack Excelsior, neither being as powerful or competent as they present themselves.  It's also worth checking out Annual #1, telling the first adventure of Kirk's crew as they take over from Captain Pike's, and Annual #2, which depicts the final story of the TOS Five Year Mission and the transition over to things as depicted in The Motion Picture.  They make nice bookend stories.

Based on everything I've read, this volume finally came to an end and was relaunched because the suits at Paramount wanted less focus on the original characters and more on the traditional cast.  More's the pity, because it is the comics-specific content that bristles with creative energy and makes it stand out among the crowd of overly "safe" licensed material.  I'm looking forward to reading that next series, too, mind you, the Peter David-penned stuff in particular, but I'll miss this iteration.  If it's wrong to love having a Horta on the crew, then I don't wanna be right.