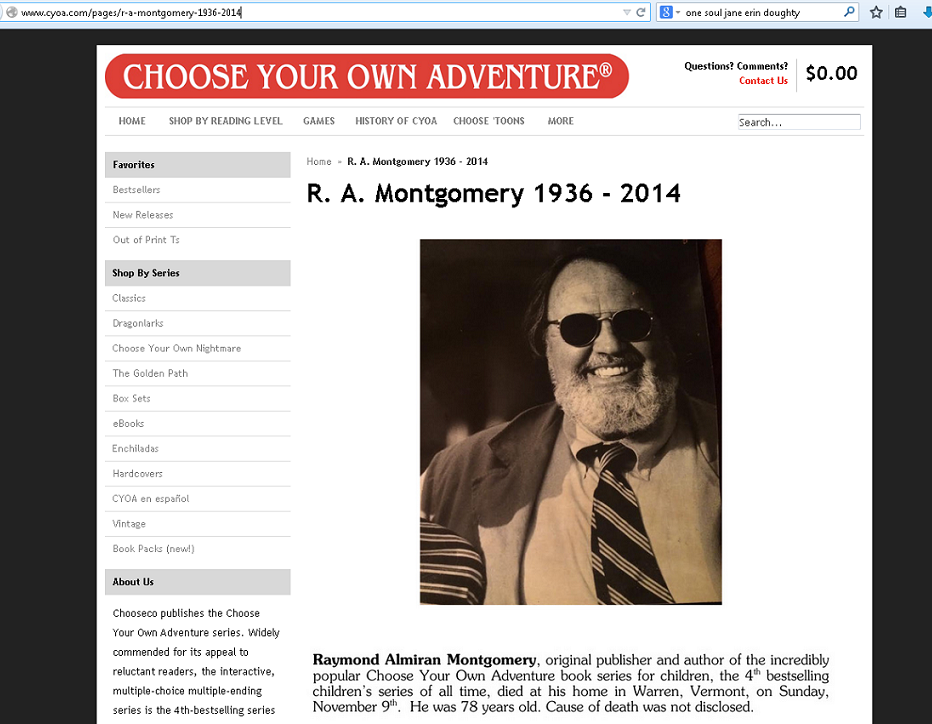 R.A. (Ray) Montgomery, original publisher and one of the chief authors of the Choose Your Own Adventure books, passed away November 9th.  I desperately wish I could turn back a few pages and make a different choice, because this is not an ending I like at all.

I consumed the Choose Your Own Adventure books like they were life-giving substances as a kid, particularly between grades 3 through 5.  I can still remember the very first one I ever bought, Montgomery's own Escape, purchased at my school book fair.  I'm not sure what it was about it that caught my eye, nor why I opted to start the series with book #20 as opposed to going back to book one (The Cave of Time by Edward Packard, the format's inventor), but I bought it, I read it, and I was instantly hooked.  Most kids adventure books at the time were pretty safe.  Even when the Hardy Boys managed to fight a spy right or something, you knew their dad would rush in at the end, and then they'd all go have pie and make fun of Aunt Gertrude. Escape, though, was another animal altogether - an American splintered by a second Civil War, totalitarian dystopia, espionage, and life-or-death situations.  Mostly death.  Oh, so many deaths (many of which are cataloged at Andrew Weiss's awesome Tumblr, You Chose Wrong).

Plus, an awesome-looking airplane dogfight on the cover: 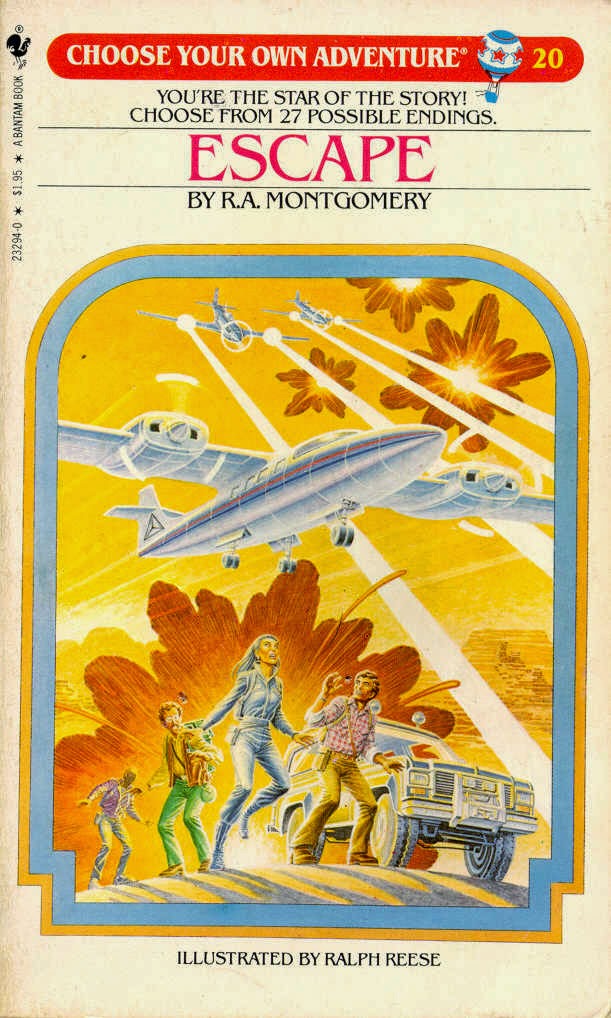 Actually, looking back, that might have been what originally caught my attention at that Book Fair.

Anyway, from that first read, I was hooked and through libraries and copious bookstore visits, I read a ton of CYOA books.  I loved that they were books but also role-playing games that didn't require special dice or tedious stat keeping.  As the format's fad took off, there were a lot of imitators - your Find Your Fates, Time Machines, and whatnot - but while those could be fun, CYOA was head & shoulders above the rest.  And for my money, Montgomery was at the top of the CYOA heap (only Packard challenged him for the title in my eyes, but it bugged me that he'd sometimes break his own rules... I'm looking at you, Inside UFO 54-40). Ray's stories were always very detailed, and that gave them a lot of extra weight.  In an interview he did with the Comic Geek Speak podcast a few years ago (recently reposted on their feed), he said he would always do a ton of research for every book. Every location, each piece of equipment... it had to be as plausible as the situation would allow or else the kids wouldn't buy into it.

He respected his audience. I respected him back for that. Thanks, Ray.
at November 15, 2014
Labels: books, childhood, my childhood is dying off in great big chunks, nostalgia chow, RIP