In which I am (indirectly) inspirational.

So of course I ran out to buy Lego Batman 3: Beyond Gotham the day it came out last week because come on (and I also got a cool Plastic Man minifigure because I pre-ordered at GameStop and I can't begin to explain all the evens I can't as a result). And I was playing it that night when I came across a part in which there's a joke about Robin thinking Batman could breathe in space (you can see it at around the 22:50 mark in this video). Being a longtime fan of David Willis's webstrip Shortpacked!, I immediately remembered this strip:

So I tweeted at David Willis to tell him, and I think I broke his mind a little: 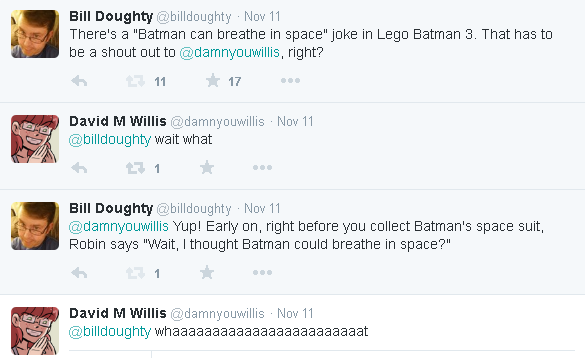 This was followed by much retweeting and replying and David continuing to add "a's" to the word what, and then we jump to Wednesday and this strip appears: 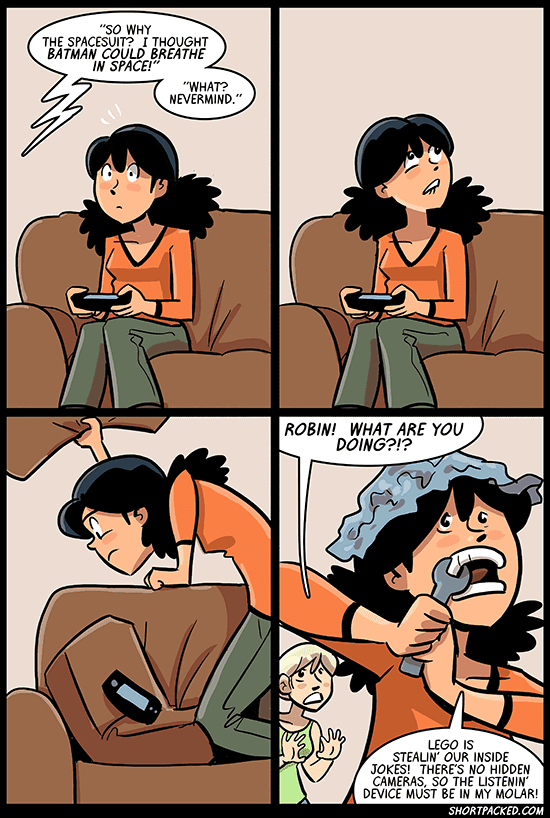 So basically if you enjoyed this strip, well, you don't have to thank me, per se, but...  I'm kidding. Mostly. But it's awesome. Is it as awesome as Pat Loika appearing in every comic ever? Well, no, of course not, but a.) Pat Loika might be the nicest dude in the comics world and he deserves all that; and b.) I still made comics happen in a very indirect way and believe you me, Sonny Jim, I'll take it.
at November 21, 2014
Labels: Batman, comics, lego, Shortpacked, video games, webcomics