You otter be in pictures. On the internet.

Aren't you tired of cats having the run of the internet?  I sure am.  It's long past time to take the webs of inter back from the cats and letting another cute animal have a go.  Let's turn things over to the otters. 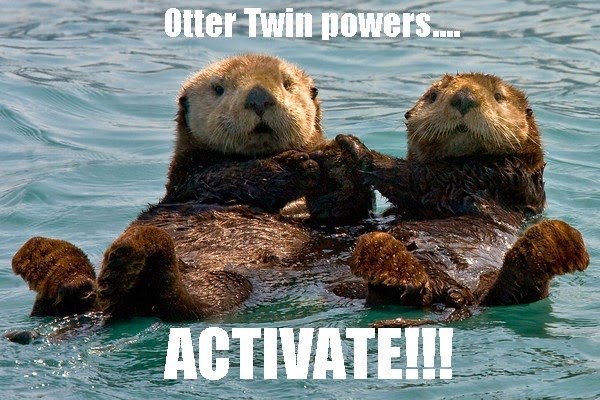 Continuing on the Star Trek theme - because when I fixate, I fixate hard - I went to Boston for my very first Star Trek convention in Boston this past weekend.  I've been to quite a few comic (or mostly comics-related) cons in the past, but this was the first such event I've been to devoted to something that is largely based in another medium, the first focused on a specific property, and the first put on by convention-producing giants Creation Entertainment (they did put on a con in my home town as a kid, but I didn't go;  legend has it it was sparsely attended - this was central Maine after all - so they never came back).

I was looking forward to it, but really didn't know what to expect, and I'd be lying if I said I wasn't hoping that it'd be at least a little bit like Shatner's famous "Get a Life!" SNL sketch.  It was not like that at all, obviously, but what I did encounter was mostly positive, but there were a few disappointments.


The biggest was the cancellations.  Kate Mulgrew, Scott Bakula, and Avery Brooks were all scheduled to attend at one point or another, but all had to cancel due to other engagements.  Karl Urban and Bruce Greenwood similarly cancelled.  So that's 3 Captains (4, if you count Greenwood) and the entire NuTrek presence that had been promised and all had to back out.  I'm not angry, and I'm certainly not blaming them, life happens sometimes, but it was still a letdown.  Creation got some replacement guests in where they could (Walter Koenig, Nana Visitor, a few others), so good on them for that, but still, it's hard not to feel let down there.

The dealers' room was small and sparse, too.  Given the universe of Trek merch out there, I expected to see a lot more of it for sale, but 2 small rooms and maybe a total of 10 dealers was it.


And given what I've heard about Trek cosplay through the years, I expected to see a lot more of it.  What there was was generally really good - lots of TOS and TNG Starfleet costumes, a kid in a great Borg costume complete with light-up gun and spinning saw hand, a couple of folks in Niners (the DS9 baseball team) uniforms, an Andorian or two (always awesome), and a guy who looked uncannily like James Doohan.  But by and large, everyone looked more or less like me: geeky t-shirt, backpack, waterbottle, etc.

I dunno, I guess I figured with a major city like Boston, it'd just be... bigger, more energetic.  Maybe the cancellations took the wind out of some people's sails.  Also, I was only able to go on the Sunday, so it might just have been the slower day.  It could be any number of things.

This isn't to say I had a bad time, though.  Despite all the naysaying above, I enjoyed myself.  Got to meet up with some rarely seen friends, saw some funny presentations / Q&A sessions with some Trek actors, got to meet Robert Picardo (who is excellent in everything because he's been in about damn near everything), bought a few cool tchotchkes (the Eaglemoss model & magazine of the USS Reliant, my favorite ship design; the Art Asylum/Previews phaser & communicator set; a paperback of Alan Dean Foster adaptations of the animated series), and generally got to commune with fellow geeky folks and further my appreciation of the whole Star Trek franchise and experience.

It was a good day out, is what I'm saying.  And I'm jazzed for the 2016 convention (the shortened 2015 con tour isn't coming to Boston), which will be celebrating the 50th anniversary.  Plenty of time to finish rewatching TOS and making my way through DS9 for the first time, and hopefully even moving on from there.
at June 25, 2014
Labels: Boston, cons, Star Trek, TV

It just hit me recently that somewhere in the past few years - I'm not sure when exactly - that I started liking Star Trek better than Star Wars, and wasn't sure how to feel about that at first.  Not that I ever disliked Trek by any means... I watched reruns of the original series throughout childhood, kept up with TNG as it aired (though I never watched much of DS9, Voyager, or Enterprise, though I'm getting into them all to varying degrees now), saw all the movies, etc.  But it's like Elvis and the Beatles, Coke and Pepsi, Marvel and DC... you can like both, but you always prefer one over the other, and I chose the fantasy adventure aspects of Star Wars over Star Trek's ruminations on the human condition.

Also, lightsaber battles are usually more interesting than conference table discussions.  Just puttin' that out there.

But in the past several years, through the prequels (which, yeah, weren't very good but still kind of watchable) and spin-offs like Clone Wars (which varied in quality through seasons but was overall pretty decent), it occurred to me that no matter the setting, all of the various Star Wars stories are basically variations on the same story: Jedi (and friends) vs. Sith (and underlings).  It can be a good story, sure, but it does feel pretty redundant to me after a while, which is probably why I was never able to successfully marathon the Star Wars movies without getting bored, even at the heights of my SW fandom as a kid.

Star Trek, however, tells a number of stories (or at least a number of perspectives of its shared universe) across its various permutations, and I find that more compelling.  Now, yeah, it has the advantage of having existed longer and hundreds of additional hours of programming to tell those stories, but even still, it feels less repetitive.  There's the overarching vision of "Let's put our differences aside and learn to get along", but each iteration of Trek takes a different approach to this.  TOS's very mission statement involved "seeking out new life," so there was a big emphasis on exploration and discovery.  By the time of TNG, a good deal of the exploring had been done, so that show was more about maintaining diplomatic balance.  DS9 is life on the frontier, far away from the watchful eyes of home where finding common ground and maintaining the peace occasionally involves actions that go beyond what is the law and focus instead on what's right (or at least the most right... for right now).  Voyager shows us cooperation-as-survival method... they don't make efforts to establish good relations with the folks they meet in the Delta Quadrant, they don't get home.  And with Enterprise, we look back at a people taking their first steps into joining a larger community... Earth thinks its ready, Vulcan thinks Earth isn't, and the real answer is probably somewhere in between.

(I'm purposely leaving the JJ Abrams movies out for now, since those are basically the Ultimate/New 52 rebooted TOS.  I've liked them both so far, they're the sort of Big Event Stories that the best of the original Trek movies are, I think, but they're more concerned with "and this is our version of _______" than I'd like, so they still feel like we're retreading familiar ground.  If I have one wish for the next movie, it's that I want it to be its own thing.)

So although I still find the seemingly endless conferencing a bit tedious (I don't care if you're talking about tachyon particles, genetically enhanced dictators from the 1990s, or life... but not as we know it, it still feels like a work meeting), I'm having fun rediscovering this franchise that I had enjoyed but never paid as much attention to because it wasn't as flashy and lacked sword fights.  And although I'm starting to enjoy DS9, which I could never get into at the time of its airing (I was one of the people making the "But how can they call it Trek when they don't go anywhere?" jokes... sorry about that; 1993 me will be suitably chastised), I find I'm particularly enamored of TOS.  The newly remastered editions are neat to look at (even if I do find myself missing the model shots), and there's something about that mid-to-late 60s mix of "gee whiz" optimism in the face of acknowledging the harshness of life that I find compelling.  It conformed to the standards of TV of the era while still trying to stretch them as much as possible.  TOS is a show that couldn't have been made prior to the Kennedy assassination and the cultural loss of innocence that followed, but that's a thought for another day. 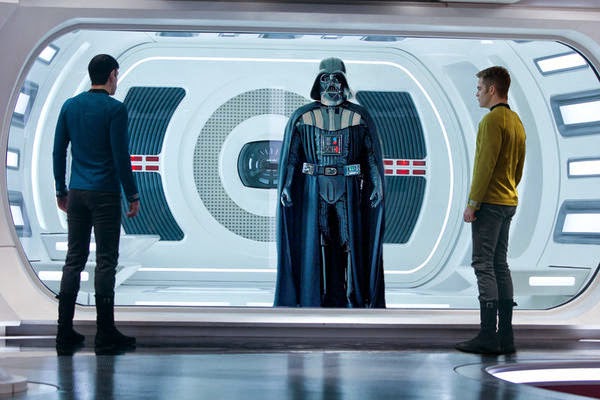 (By the way, if you made the images used in this post, or know who did, let me know so I can give them proper attribution.  They're nice and credit should be given where due!)
at June 14, 2014
Labels: movies, Star Trek, Star Wars, TV
Newer Posts Older Posts Home
Subscribe to: Posts (Atom)