Look up, waaaaaaay up: a short appreciation of CBC's The Friendly Giant 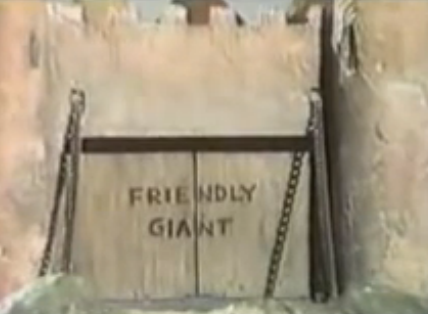 I know we're supposed to be all "Boo, Canada!" here in the states right now because of the women's Olympic hockey final or something, but I can never bring myself to hate our neighbors to north.  For one thing, I grew up in Maine, so Canada really was my neighbor and I've visited a bunch of times throughout my life.  And I've written before about things they've given the world that I've enjoyed (stuff like Tim Horton's, SCTV, You Can't Do That on Television, Douglas Coupland, Reveen the Impossibilist, William Shatner, Superman co-creator Joe Shuster, and so many more), but basically my warm affection for Canada comes down to one simple fact: it's impossible to hate a country that gave us as gentle a show as The Friendly Giant.


And gentle is really the best word possible here.  The Friendly Giant was a 15-minute long show that ran for three decades on the CBC, and it helped teach generations of Canadian children (or Americans north enough to get the CBC) an appreciation for traditional folk music, storytelling, and a relaxed, genial humor.  Every show followed pretty much the same pattern... the camera would pan across a model of a village until we saw the feet of Friendly (Bob Homme), who would then ask the audience to "Look up, waaaaaaaay up!" and speak with him.  Then it was back to the castle, where he'd set out tiny model furniture for (ostensibly) us at home to relax in while he, Jerome the Giraffe (who'd peak his head in through the window), and Rusty the Rooster (who lived in a bag hanging on the wall) would talk and entertain.  As the show ended, he'd put the furniture back and give us a kind wave and farewell, and then the drawbridge would go up for another day.

(Speaking of the furniture, my grandmother used to have a couple of tiny chairs on the windowsill of her apartment when I was little that reminded me of the ones on the show.  Whenever we'd go to see her, I liked to pretend we were visiting Friendly's castle.  Nanny had no idea what I was doing but she'd indulge me because she was great like that.)


It probably seems a bit slow by today's standards.  Truthfully, it was probably slow by the standards of the time I can remember watching it (about 1979 through maybe 1981, or whenever it was our cable provider replaced the CBC with another hallmark of my childhood, Boston's WVLI - Channel 56).  But I think that was a large part of the appeal.  For one thing, it came on first thing in the morning, so it was a good show to wake up to and begin the slow build up through Mr. Dressup and maybe the Canadian Sesame Street until I'd switch over to Captain Kangaroo or regular Sesame Street.  The slow pace and, well, friendly manner of the show also hit those same parts of my brain that appreciated Mister Rogers' Neighborhood.  It's not too hard to imagine the village where Friendly's castle sat being adjacent to either Fred Rogers' "TV neighborhood" (where the real world interactions took place) or the Neighborhood of Make-Believe.  Handyman Negry and Lady Aberlin could play guitar while Friendly accompanies them on the recorder or something... it's a nice thought.


They definitely don't make 'em like this anymore, but thankfully there are a bunch of episodes up on YouTube if and when I want a reminder of the time when they did.
at February 23, 2014
Labels: Canada, childhood, The Friendly Giant, TV