Thoughts on The Time of the Doctor


Spoilers to follow on "The Time of the Doctor," so if you haven't watched it yet you're reading on at your own peril. 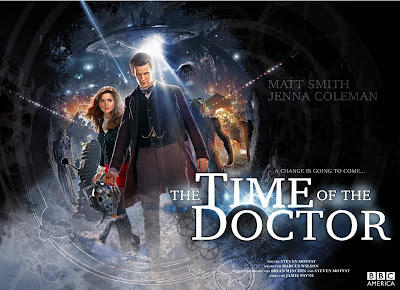 Still trying to parse my thoughts on "The Time of the Doctor," the most recent Doctor Who Christmas special and the final bow for 11th/12th/13th/Whatever-th Doctor Matt Smith.


There were bits of it I liked, of course.  Smith hasn't been my favorite Doctor (probably wouldn't even make the top 5 if I'm honest), but he's always at his best when he puts the manic silliness off to the side a bit (the Doctor should always be a little manic and silly, after all) and shows his world-weariness.  Spending hundreds of years defending Christmas/Trenzalore from pretty much every enemy he had ever faced - visibly aging while doing so - was an effective way of doing this, particularly as he willingly marched off to what he knew was his final day (the post-Time War Doctors have all had a death wish, anyway, even after what we learn in "The Day of the Doctor," so if anything he seemed kind of relieved).

I also appreciate that Steven Moffat addressed the elephant in the room of the Time Lord regeneration limit.  This has been hanging over Who fandom's collective heads for a while now, especially as the Doctor's regenerations entered the double digits.  As long as the show was successful we knew that of course he'd wind up with more than the usual 13 lives (and that the 500+ number he told Clyde on that episode of The Sarah Jane Adventures was rubbish), it was just a question of how and when.  The how was, admittedly, a lot of deus ex machina magic wand hooey, I grant you, but at least Moffat alluded to it early in the script when the Doctor produced the seal of the Time Lords' High Council and announced he'd "nicked it from the Master in the Death Zone."  Remember, at that time (in "The Five Doctors") the Time Lords promised the Master a whole new life cycle if he rescued the Doctor for them, so we had some inclination that it was allegedly in their power.  So it's not like he pulled the idea completely out of thin air, and in fact alluded to it very subtly.  Nice trick on the part of the Grand Moff there.

As for the when, well, as I said, we knew it had to happen sooner or later (especially with John Hurt having been retconned into the mix), so best to just get it over with.  Besides, with the prospect of 13 new lives, maybe the Doctor will be a bit less maudlin.

The plot itself, well... it was a bit of a mess, wasn't it?  As with River Song's many backstory revelations in "Let's Kill Hitler," I think Moffat fell a bit too much in love with exploring his companions' back story, to the point where many ongoing plot threads were ignored until almost the last minute.  While I appreciate that he did finally get around to things like the crack in the universe, the Silence, and just who did blow up the TARDIS that one time (as well as newer wrinkles like Trenzalore and the location of the surviving Time Lords), I would have preferred these ideas spaced out more.  Instead we got endless ruminations on "the girl who waited" and "the impossible girl" (both of whom I liked, but come on!), and then everything else.

Basically, "The Time of the Doctor" is the entire Moffat/Smith era in microcosm then, isn't it?  Some good bits, a whole lot of rumination, and then everything thrown in at the end.  I worry that being so fixated on his own concepts and continuity minutiae (both new series and original) is playing too heavily toward the hardcore fans, be they old school Whovians or the newer squeeing Tumblr types, and costing the series its more casual fans (like my wife, who has had the same criticism of the past 3 stories: "I don't get it.  And I don't care to.").  I'm the type to stick around because I'm Stockholm Syndromed into loving this series no matter what, but hoping with the Moffat/Peter Capaldi era we step away from the navel-gazing and look onward to the new, extended future of the Doctor's lives. 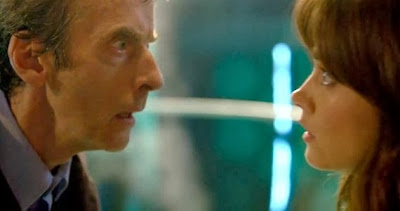