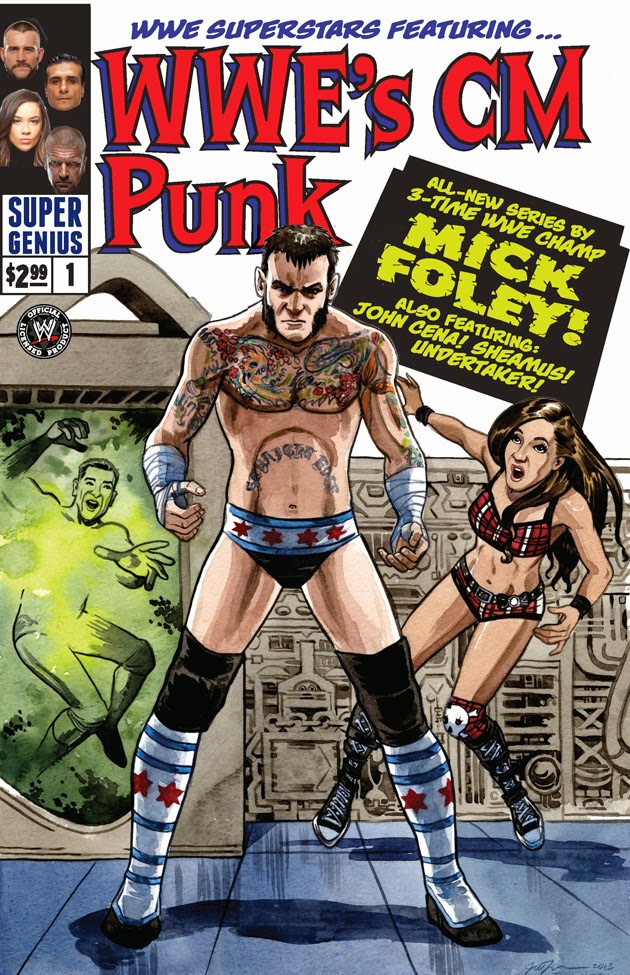 I've been reading comic books for nearly 35 years now, so although I hate it when Fans of a Certain Age claim to have seen it all, well... I'm of a certain age, and most days I feel like I've seen it all.  So it's a real treat to be genuinely surprised by something.  It's an even bigger treat when that surprise comes from a book like WWE Superstars #1.

There have been wrestling comics before.  Most of the ones I've read have been pretty awful.  Chaos Comics' Mankind one-shot, for instance, might just be the single worst comic book I've ever read, which is sad because Mick Foley - the man who wrestled under that name (as well as under the monikers of Cactus Jack, Dude Love, and his own name) - is one of my favorite wrestlers of all time, and a hell of a nice guy to boot.  Luckily, he's also a good writer, and as co-writer of this book (along with Shane Riches; art is by Alitha Martinez) has gone a long way to repairing his four color legacy.

The story takes recognizable WWE personalities and concepts and applies them - gimmicks, characterizations, catchphrases and all - to a crime/noir setting.  John Cena is a cop imprisoned for a crime he did not commit, loved by half of Titan City and hated by the rest.  Triple H runs the city in the name of - and under the guidance of - Vince McMahon.  CM Punk is a no-nonsense agitator trying to make people aware of the threat of McMahon's Authority.  Randy Orton's a slimy DA trying to take control of the city, frustrated in his efforts by the "YES!"-spray painting upstart Daniel Bryan.  The members of the Shield are the Authority's enforcers, technically the law but serving no good purpose.  And so on. 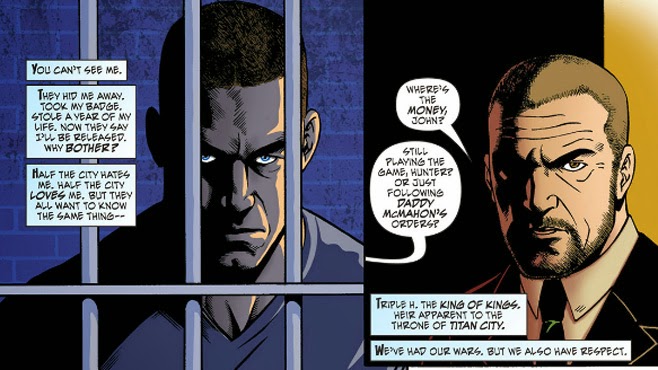 It probably shouldn't work, but it does.  Professional wrestling has always been theatrical, and a good match tells a story; in fact, Vince McMahon has often said that he's not in the wrestling business, but the movie business.  The only difference here is that the story removes whatever metaphor the ring represents in McMahon's "little movies" and places events in actual settings.  It also helps that Foley's at the helm.  He's adept at expressing himself both in the ring and on the page, so he can make the transition work naturally, and because he comes from the wrestling world, it never seems like he's making fun of the people and situations on which he's basing everything.  He can sell a chair shot, and he can sell someone working their wrestling catchphrase into their dialogue.  Not an easy trick.

I picked this up on a whim, but I'm genuinely curious to see where this goes.  No John Cena, I did not see that.  But I'm kind of glad I didn't.
at January 17, 2014
Labels: comics, wrestling