The Trusty Plinko Stick Guide to Classic Doctor Who Part 3

More recommendations for folks interested in exploring the original Doctor Who.  Some are good, some, well... some aren't, but I think they're all important to see for one reason or another.  Go back and read part one and part two if you're interested.

We are firmly in John Nathan-Turner country now, boys and girls.  Beware... things are going to get very, very gaudy from here on out. 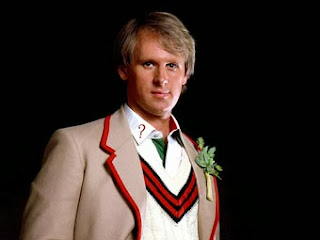 Davison's quieter, more compassionate Doctor can seem like a jarring transition from the big, boisterous, and often self-centered version portrayed by Tom Baker, and I think a lot of people overlook and/or underappreciate this Doctor as a result.  Davison was my first Doctor, though, and still a favorite as a result. 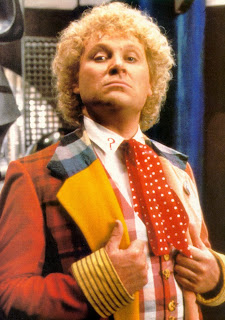 6th Doctor – Colin Baker
Look, Colin Baker’s era… it has problems, chief among them The Worst Costume in Television History (though it has grown on me over the years) and a script editor (Eric Saward) who preferred that the Doctor took a backseat to the Leatherclad Mercenary of the Week.  Seriously, that man had issues... watch interviews with the man now and he's one big ball of bitter.  This Doctor fares much, much better in the many audio adventures Colin Baker has recorded with Big Finish, but I think there’s at least some goodness to be found in his TV stories. 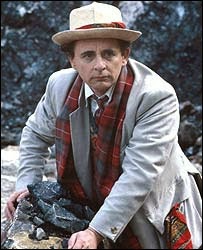 7th Doctor – Sylvester McCoy
McCoy is almost two different Doctors unto himself, given that he spends his first season as a malapropism-spouting, spoon-playing clown, the his final two seasons as a master manipulator, working situations, monsters, guest stars, and even his own companion like a chessmaster.  Either way, the man can roll his Rs like nobody's business. 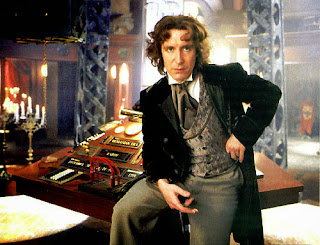 8th Doctor – Paul McGann
Well, now, this is interesting, isn't it?  Until very, very recently, McGann only got one official on-screen appearance as the Doctor, the 1996 TV movie.  However, it seems like his story may yet have a least a bit more on-screen life to it, we'll just have to see...
And that, kids, is it.  There's lots more classic series Doctor Who-related media to consume, of course, in the form of novels, comics, computer games, and audio dramas from both Big Finish and the BBC, though there's always some debate on how "canonical" any of those can be considered (although Big Finish looks to have gotten a big thumbs up thanks to a line in "The Night of the Doctor").  That, however, is a post for another day.  In the meantime, get out there and watch some Doctor Who!
at November 15, 2013
Labels: Doctor Who, Guide to Classic Doctor Who, TV