TARDITBODO (Time and Relative Dimension in Tiny Bricks of Danish Origin), or Who's Lego?

I was playing around with Lego and thinking about Doctor Who the other night (pretty typical night here at Trusty Plinko Stick World Headquarters (thousands of miles beneath the Earth's crust!), and of course got to thinking that I should combine the two. I've made some mostly purist (i.e.: pulling together without add-ons or parts modification) attempts at Doctor Who minifigures before*, but haven't gone much beyond that.  Such a project may not amount to a hill of beans, but this is my hill, and these are my beans, so I went diving in the Lego bins and this is what I came up with. 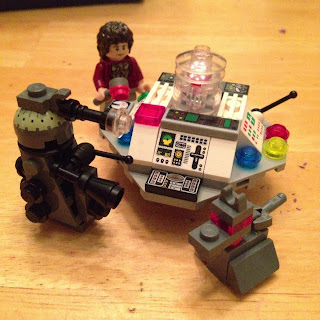 The 4th Doctor here is made up of mostly Hobbit parts, since Frodo hair + Bilbo torso = a pretty good approximation for the early Tom Baker Doctor.  The Dalek and K9 were based on designs I had found in various places online, though tweaked a bit based on some personal aesthetic choices and parts availability.  The console should probably have two more work stations, but it'll do for now.

But having put this together, of course I needed to add at least a little bit of the control room to go with it. 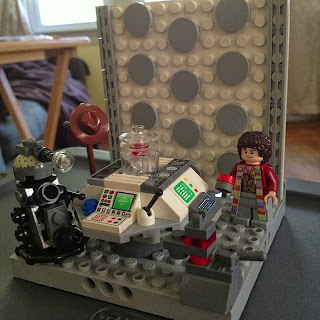 I'd like to figure out a decent way to make the roundels look recessed into the wall rather than sticking out from it, and it should be a gray wall with white roundels, but that didn't look very good.  All things considered, I'm happy for a first go at it.  And yes, I added a scarf for the Doctor.  Sticker paper from Staples is a Lego customizer's best friend. 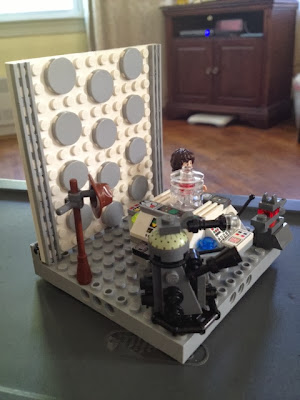 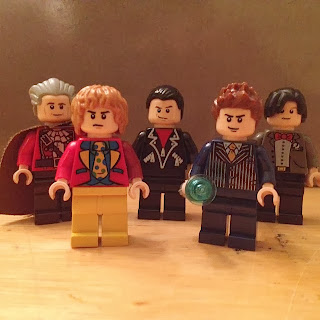 The bandolier on the pirate torso bugs me, but it was hard to pass up the frilly cravat.  The Collectible Minifigure Small Clown torso was as close as I was going to get to 6's amazing technicolor dream coat, but I did switch out one of the arms for different shade of red since the real costume's sleeves don't match, either.  9, 10, and 11 all came together pretty easily, though 11's hair is a customized piece ordered from BrickForge (regular Lego hair just wasn't floppy enough).

Here's my go at a Cyberman and the Master 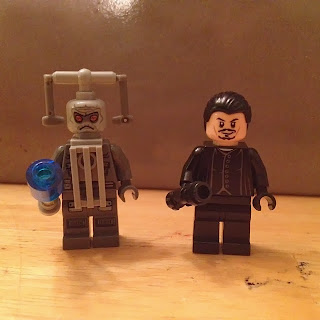 The Master came together pretty easily (I'd have preferred him to look a little more like Roger Delgado, but maybe a different had would fix that), but the Cyberman was a challenge.  He came out pretty weird looking, but I kinda like it.  It's almost more like one of the originals from The Tenth Planet (minus the big accordion looking chest piece).  The biggest problem here was getting that T-bar into the head.  Ended up having to cut it down so it would fit in.  I should probably trim it down a bit more, in fact. 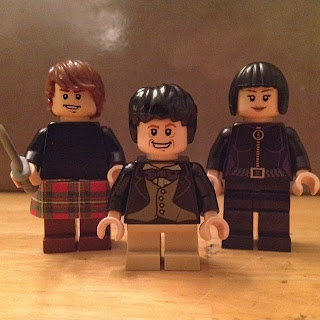 I think I need a different head for Zoe, but otherwise I'm super happy with how these three came out.  The face for 2 does a good job of capturing Troughton's impish grin (even if the eyebrows don't match the hair), and the Collectible Minifigures' Bagpiper kilt made pulling a decent Jamie together a snap.  As for Zoe, well, how could I not use Catwoman's body to make everyone's favorite astrophysicist/librarian/logician's sparkly catsuit?

And now I still want to make more!  I'm thinking the 3rd Doctor needs Bessie, and even though I have the Character Building TARDIS, I still feel compelled to make one.  And I'm open to any suggestions people may have.  As long as I have the will, the imagination, and enough bricks and bodyparts largely lifted from Harry Potter, Lord of the Rings, and the Super Hero lines, I'm willing to press forward.

*Which may seem redundant in the face of the generally-pretty-good Character Building Doctor Who sets, but good as they can be (and I do have a few), come on, those aren't really Lego.
at October 14, 2013
Labels: Doctor Who, lego, Lego Builds