My first MOC: the wrestling ring (or, Legomania is runnin' wild, brother!)

As has probably been pretty clear on this blog, I've gotten back into Lego in the past few years thanks to playing with the kiddo, and recently I decided to have a go at my first real MOC (My Own Creation) / scene, a wrestling ring.  It's very much a work in progress, and though I've been building actual kits for a while now, I'm still very much a newb to the AFOL (Adult Fan of Lego) world and I'm not going to be getting the call to go be an official Master Builder anytime soon.  I think I'm off to an okay start, but I've still got a ways to go before I feel like I'm satisfied and if there are any other AFOLs (or KFOLs, for that matter) out there who have any literally-constructive criticism and feedback for me, I'm all ears.]

Here's an overview of the ringside area.  I'm already not very satisfied with the green baseplate.  The color doesn't really work for the environment, and the basic square is a bit too small to build out with much hope of giving an arena feel (not going to build the whole arena, but I do want to have room for guardrails, front row fans, and maybe an entrance ramp).  They make the larger gray plates which I may upgrade to eventually, but then I think I need to make different-colored stairs into the ring. 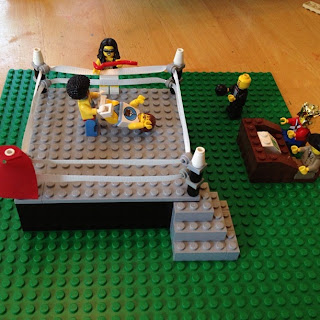 Closer view of the action in the ring.  Wrestling rings usually have three sets of ropes and turnbuckles, but I tried that and it didn't really work with the scale of the minifigures.  Not as much room on the ring apron as I would've liked, but moving the ring posts in resulted in too little room within the ring itself.  The dimensions are still a bit small, but a.) I wasn't making it specifically to scale; b.) this was what I had access to, brickwise. 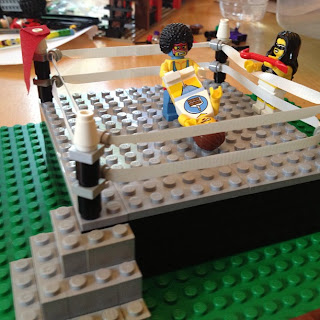 An even closer view of the action.  El Funkistador is putting the hurt on The Birthday Boy, but Surfer Rosa is attempting to turn the tide.  I still need a ref.  I'd also like to replace the ribbon I'm using for ropes with a nice, thick cord or twine, but again, that's what I had access to (thanks to the wife's craft table) and it works well-enough for right now. 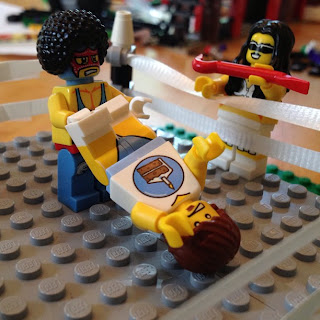 The announce team calling the match from ringside.  Yes, this is supposed to be Jim Ross (r.) and Jerry "The King" Lawler, because I watched a lot of wrestling during the Monday Night Wars and that's just how it should be, man.  I'm reasonably happy with them, not so much with the table.  I need another monitor, for one thing, and I'd like to find a way to have them look recessed into the table the way you see with WWE announcer tables. 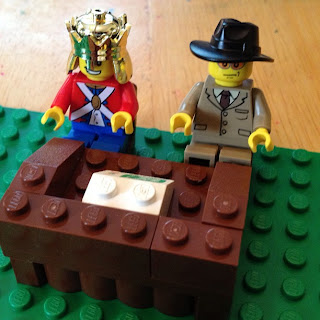 The ringside PA announcer (yeah, that's supposed to be Howard Finkel, too) gets ready to call the result.  I've already replace the microphone head with something smaller, and if I can get 3 more of those pieces, I may use those for the tops of the ringposts instead.  I think I'm going to look for an actual microphone piece (like the one that came with the rapper collectible minifig or the rock band set from the Lego Store) or 3, also, so all these guys can be properly miked. 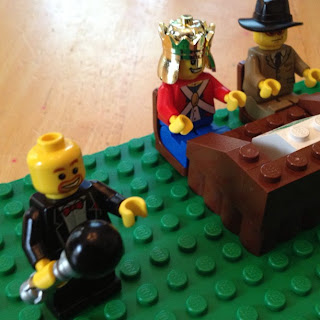 One more shot of El Funkistador and Birthday Boy.  E.F. is, of course, the Super Wrestler from the Series 1 collectible minifig wave, though I got him from the Build-A-Minifigure assortment bins at the Lego Store, which is why he also has an Afro because it was there in the bin and he needed another accessory and I don't have to explain my ways to you people.  Birthday Boy is an amalgam of various parts.  The torso is from a party favor kit because we still had a few extras kicking around from my son's birthday last year. 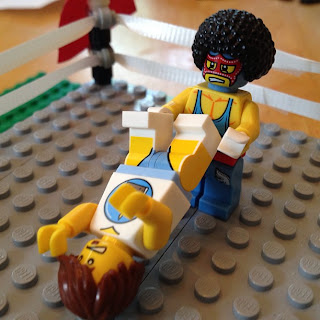 All this is what I came up with a few weeks back.  Haven't had much time to work on it since, but it's been in my head pretty much the whole time.  As I said, feedback and suggestions are greatly appreciated... let me know what you think!
at August 01, 2013
Labels: lego, Lego Builds, MOC, wrestling