The Trusty Plinko Stick Guide to Classic Doctor Who Part 1

Ever since the current Doctor Who series began airing in the States and gaining in popularity, I've had people approach me saying they were interested in exploring the original series and ask where they should start.  Enough people that I started making lists.  Enough, in fact, that I ended up making one big list that I saved as Google Drive and Evernote docs so I could just send it out to any new people that asked rather than have to recreate the thing from scratch every single time.

After getting their assurances that, yes, they knew what they were in for and that their imaginations would have to fill in a lot of the things that are being taken care of by the special effects budget nowadays (I've heard people compare classic Who to filmed plays rather than "typical" TV programs, and I think this is often spot-on, particularly in the early days), I send them my recommendations for the stories I think they should watch.  I always include the caveats that these are my recommendations, that their tastes may differ, and that I include a few widely-accepted-to-be-bad stories in the mix because they may still be technically important to the show's history and/or I just happen to like them in spite of their shortcomings.

I've expanded the list a bit for bloggy purposes, but the same caveats apply.  These are my recommendations, yours may vary wildly, and there's a bit of bad in here because if you want the full classic series experience, you need to experience a few groaners, in much the same way everyone interested in Star Trek needs to see Spock's Brain or the one with Space-braham Lincoln.

I've also only included stories known to be complete (or mostly complete) and available commercially on DVD/VHS because it's just easier that way.  If someone wants to experience the (sadly many) lost stories through recreations or on CD, they can explore those avenues on their own.

Classic Series Starting Point: The Five Doctors.  No question at all. 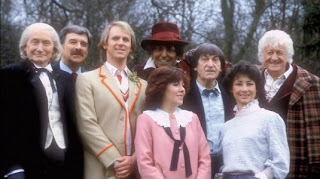 Although it has its flaws (the original first Doctor had long since died and was replaced by another actor, Tom Baker opted out and is replaced with un-aired footage, Sarah Jane falls to her near-death down an ever-so-slight incline, certain story beats don't jibe well with series continuity, etc.), this 20th anniversary story is the best starting point because you get a feel for the then-current Doctor and each of his predecessors, various companions and monsters, and some costume-drama-esque palace intrigue besides.  It's a Whitman's Sampler for the entire series up to that point, and a great way to lead you off into other eras if you want to learn more about, say, this Pertwee fellow with the cloak and the yellow roadster.  I'm also partial because this was one of the earliest stories I ever saw, and it went a long way toward explaining to 8 or 9-year old me how this was a show about all these guys who were really just the one guy.

Moving on by Doctor (not necessarily the order I think everyone should go, by the way, but certainly the easiest way to list everything)... 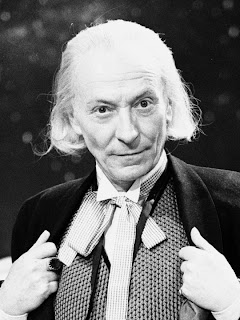 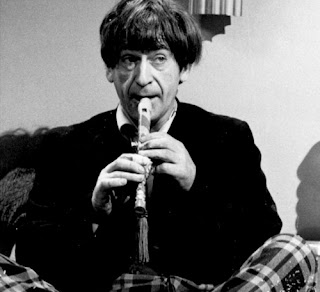 2nd Doctor – Patrick Troughton
(Frustratingly, most Troughton stories (and a sizable chunk of Hartnell's, for that matter) no longer exist in complete forms.  Stupid BBC and the short-sighted archiving policies of early television in general!  You can see sample episodes from some of those - the Lost in Time box set has a bunch of loose ends from both Hartnell and Troughton - but here’s what’s worth watching in more-or-less complete form.)


As this post has long since passed the TL;DR mark, I think we'll end part 1 with Troughton.  In part 2, we'll get to frilly shirts, long scarves, fancy cars, robot dogs, and quarries.  Oh, so many quarries.