I'll keep this general as I can for the first paragraph or so, but beyond that, it's SPOILER country.  Got it?  Good. 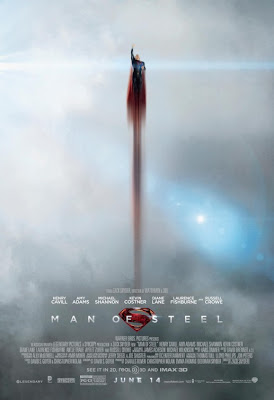 Like a lot of people in this country (to the tune of $125 million, according to Box Office Mojo), I saw Man of Steel this weekend.  Unlike a little more than half the critics (according to Rotten Tomatoes) and a bunch of really loud people on the internet, I enjoyed it.  I don't think it was the best superhero movie ever made (that'd be The Incredibles), nor do I think it's the perfect Superman movie (because as much as I like some of the others, I don't think that has been made yet), but it was pretty much everything I wanted it to be: epic, sweeping, well-acted, well-shot & edited, and with Superman foiling something other than real estate-based crime.  There were some stylistic and story choices that I may not have agreed with, and a few scenes that I'm still a little haunted by a few days later, but I think the fact that I'm still thinking about them at all - and that they're causing such discussion online and in the media - is actually a good thing, and that it contributes to the film's overall success.  Like it or hate it, you had a reaction, and that's a win for Zach Snyder, David Goyer, and everyone else involved with bringing this movie to life.

Okay, now for some more specific thoughts.  Here's where it's going to get SPOILERY.  And I'm going to talk about the film's BIG happening first, because let's face it, that's the Kryptonian Flame Dragon in the room.  If you haven't seen the movie yet, you read on at your own risk.

Long story short (WAY too late), I enjoyed myself, it made me think, and it has people talking about Superman, and as far as I'm concerned, that makes Man of Steel a success in my mind.  You are, of course, welcome to tell me that I am right or wrong.  Please bear in mind that no discussion at all will only confirm in my mind that I am the most correct person in the history of being correct and that all of my opinions are therefore unimpeachably, according to Hoyle 100% accurate for now and the rest of time. You have been warned.
(BTW, this was post 1300!)