The Adventure People's Astro Knight: An Appreciation (or, Legends of the Short Knight)

Astro Knight was one of my favorite toys as a kid, but he was also an enigma. 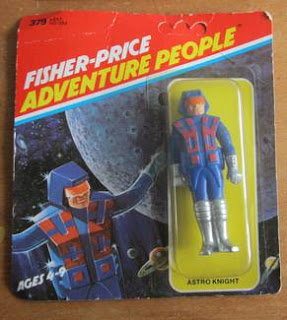 There's no question that he was the greatest of the Adventure People (though Clawtron and X-Ray Man were pretty cool, too), but he never really fit in with the rest of the line.  His legs were permanently stuck together, his arms only moved outward in a flying pose (or some sort of space hug, I suppose), and he was a good head shorter than all the other figures. 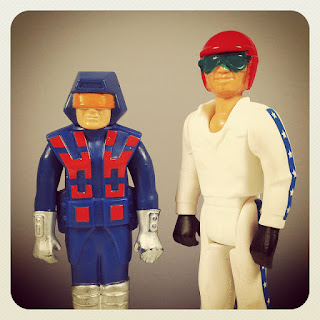 But that was a lot less noticeable when he was paired with his glider, which was pretty awesome as toy hang gliders go (and sturdier than the later G.I. Joe Falcon and Viper Gliders, if memory serves). 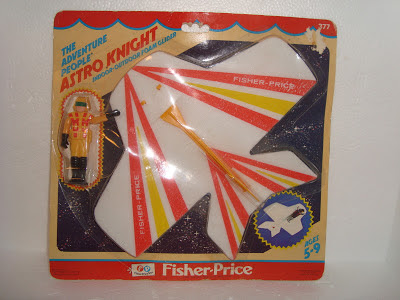 But what was his deal?  Was Astro Knight his name or is that just a job description like the rest of the Adventure People had?  What sort of power set did he have?  The packaging seems to indicate he could survive in space and that he could fly, but if he could fly then why the hang glider?  And what's with the little opening on his helmet above the visor?  I always imagined some sort of laser beam came out of that (sounding like your typical Jonny Quest-style death ray), but again, that's just guess work.  Was he human or alien?  And why so short?  If alien, was he considered short or tall on his homeworld?

I'll never get the answers I'm seeking, since Fisher-Price was great on product design but pretty lousy with the backstory.  But maybe that was an advantage here.  The blank slate meant he could be dropped pretty easily into any setting and with any other like-sized action figure line, which became even more helpful when I started repurposing figures into my DIY Doctor Who toys because I didn't have to come up with some weird scenario in which some short, cosmic-powered guy was showing up to help fight Cobra or something.  And he got a lot of use throughout my action-figure-playing-with period, since like most Fisher-Price toys, he was awesomely permanent.  I'm sure the brick-like nature of his design added to his near-indestructibility (another power?).

And a quick look around the internet shows that I'm not the only one upon whom Astro Knight cast an ironically long shadow, as a few people have attempted to customize their own updated versions (while correcting for poseability and height). 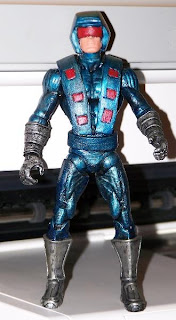 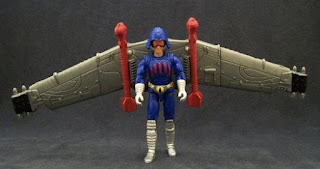 Astro Knight, you brought up a lot more questions than you ever did answer, and I always thought it was weird that a superhero-looking guy would've needed to sit on a phone book to see out of car window (this was long before I had ever heard of Wolverine, remember), but you always held a place of honor in the toy box.
at June 12, 2013
Labels: childhood, nostalgia chow, toys