I am Superman and I can do anything. 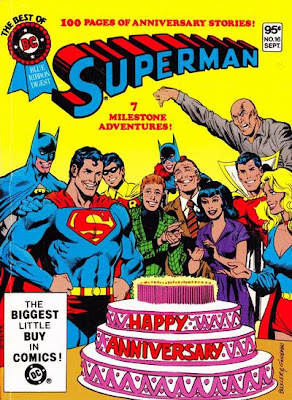 As an avowed and proud Superman fan, I feel bad that I didn't post anything about the Man of Steel on April 18th, the 75th anniversary of the release of Action Comics #1.  But even if this is off by an entire month (and some change), I'm still doing this in a less-belated manner than DC Comics, which isn't celebrating the occasion until June 12th, so I've got that going for me, which is nice.

(Not to knock entirely on DC for that decision, seeing how Action Comics #1 was cover dated June 1938 and it's really tedious explaining that whole cover date / street date thing to people who don't already know the difference and likely don't care.  Plus, Man of Steel is released later that week, and your average international multimedia conglomerate like Time-Warner sure does love some cross-platform synergy.  But still, it would've killed them to send a card?)

It's kind of hard to explain the place that Superman occupies in my headspace.  He's one of my favorite superheroes, sure (occupying a plateau with Batman, and the original Captain Marvel), though calling him one of my favorite fictional characters, regardless of genre or medium, is probably more accurate.  But that's not to say I read, watch, play, and/or collect everything he appears in or on, because let's face it, there's a whole lot of bad Superman material out there (the N64 game, for instance, which is the rare case of the internet understating how bad something is).

But I can overlook that because I look at Superman as more than just a character (which is helpful during the periods when you find the comics mostly unreadable*).  Superman, to me, is an ideal to be aspired to and embraced.  None of us can fly, change the course of rivers, or get someone else (whether robot, Batman, or JFK) to impersonate us when we need to be in the same place at the same time as our alter ego, but we can still attempt to live up to that ideal.

Whether you're the Last Son of Krypton or Joe Shmoe from Idaho, you're born with certain abilities, gifts, attributes... whatever you want to call them.  And sometimes people around you need help in ways both large and small.  You want to be like Superman?  Use what you've been given to help out the best way that you can because you can, because it's the right thing to do.

The cape, the powers, the secret identity drama?  That's all just window dressing.  What Superman is really about is basic human kindness (however ironic that may be given that he is neither basic nor human).  And that's not even just something we can aspire to, but something we can actually achieve.

That's why Superman is important to me, why I consider him a favorite even when I'm not actively following his adventures, why I can usually be found wearing something with his insignia on it every single day (usually my watch, though I do own / have owned plenty of shirts, hats, wallets, and other accoutrements through the years).

I don't believe a man can fly, but that doesn't mean we can't achieve the ideal in our own ways.