Doctor Who and the Suspiciously-Vital-to-the-Plot Supporting Characters 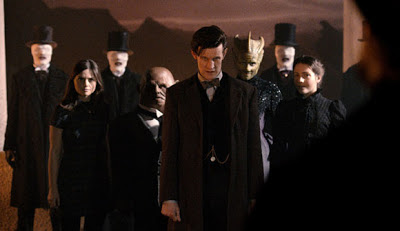 I think I'm ready for a regeneration on Doctor Who.  Maybe in the Doctor himself (though I like Smith alright), but definitely in the showrunner.  I think Steven Moffat was one of the strongest writers (arguably the strongest) in the early goings of the show's revival under Russell T. Davies.  But since taking over the show himself, I worry that he represents the sorts of problems that arise when you put someone who is too big of a fan into the big chair.

Being the caretaker of a long-running, ongoing serial narrative is a tricky task.  Add nothing to the story, and you do no better than mark time until the next caretaker comes along.  Add too much, and you risk angering or even driving away creators and audience alike.  There is a very careful balance that needs to be achieved, and neither the faint of heart nor would-be auteurs need apply.  And as is clear from the bulk of his work, Moffat definitely considers himself an auteur - and credit where it's due, he certainly has the resume to back that up.  However, I think his well-documented Who megafandom has robbed him of some of the perspective that would make him a better caretaker of the franchise.

Compare Moffat's run to Davies, the companion characters each created in particular.  Davies famously (or infamously, depending on your POV) created the first obviously canonical love interest in the history of the series; Jo, Sarah Jane, Romana, and maybe even Nyssa were always hinted at, of course, but it was never directly stated on screen; and the TV movie's Dr. Grace Holloway wasn't around long enough to seem like anything more than a one-story flirtation.  With Rose Tyler, though, it's made very clear that she and the Doctor are deeply in luuuuurrrve (even if it takes a few years after her departure to really say it say it).  But it can be argued that that change in the series norm was made to set the tone for the different needs of the modern audience, and it only served to bring to the fore what we always knew was going on in the background with Jo, Sarah Jane, et al.  The rest of Davies's companions?  Buddies for the Doctor, people for him to relate to, even act as a de facto family.  Different types of companions for a different series (much less running and screaming, and far fewer sprained ankles), ones that added new wrinkles to the established dynamic, but still recognizably Who.  Russell T. Davies really knew how to innovate with - but still respect - the established toy box.

Now look at Moffat's companions.  Two "impossible" girls who were not brought along because they seemed like fun traveling companions, but because they were Important Mysteries To Be Solved.  A man who was the most patient, loving, and loyal being in the history of Earth, and a man whose love was strong enough to somehow survive being erased from time.  And, of course, a woman so impossibly cheeky, uber-competent, and all-knowing that she had to end up being not just the Doctor's love interest, but the Doctor's kinda-sorta (but still somehow legally binding?) wife and the one person who knows every single secret in the show's history that she managed to learn them off camera because reasons.

In my eyes, the Davies companions are characters, but the Moffat companions are the Mary Sue-est of Mary Sues.  Maybe not in the direct-author-avatar sense, but they're all so Extraordinary In Every Way, Important To Every Plot, and the Knowers Of All That Which Needs To Be Known.  Just look at Clara's fate as seen in "The Name of the Doctor," in which (and I'll try to be vague here) she is shown to be not only important to this story, but Important To Every Doctor Who Story Ever.  No wonder Moffat insists that the show "has always been about the companions."  He really, really, really loves HIS companions!

And that's not to say they're bad characters; the Doctor - Amy - Rory grouping, for instance, is one of my favorite Doctor/companion teams in the show's history (even if I don't like every story they're in, I love how the characters interact).  But Moffat overestimates their importance, I think, and his desire to leave his mark on the show's long history betrays a desire to highlight his own creations at the expense of the overall narrative (and some of the theories I'm seeing for the season finale's Big Reveal don't do anything to disprove this to me).  His mark is looking more like a big, messy thumbprint as time goes on.

And this is to say nothing of his seeming desire to make EVERYTHING about the show into fairy tale (never thought I'd call a Cybermen story "twee," but I've done so TWICE under his watch).  And the recurring trend of introducing major plot threads only to sideline them ("She's the impossible girl!"  "Why?"  "Because she is, hey look a Russian submarine.") or ignore them completely (the whole exploding TARDIS thing from Series 5).  But the Mary Sues (or Larry Stus)... they're what's at the heart of my problems with the series since the Moffat era began, and what's dimming my enthusiasm as time goes on.

Look, Steven Moffat is a talented writer and producer, and there have been plenty of episodes I've enjoyed since he took the reins from Russell T. Davies (hell, most of the first half of this season was a lot of fun, particularly the Dalek Asylum, dinosaurs in space, and cubes/UNIT episodes).  And the performances from the cast have generally been pretty good.  But it's the overall direction of the show that is getting me down, and has in my opinion gotten too far away from what I'm looking for in A Good Doctor Who Story.  I won't be wandering away from the show any time soon, but I can't help but think I should be looking forward to November's 50th anniversary with unbridled enthusiasm, not mild curiosity and a dread that this, too, will miss the mark by a wide margin.
at May 19, 2013
Newer Post Older Post Home