(This started as something I posted in a thread over on The Comic Forums.  And it has SPOILERS for Batman Incorporated #8.  So if this seems familiar somehow or reveals information you've managed to somehow avoid until now, well, you know why.) 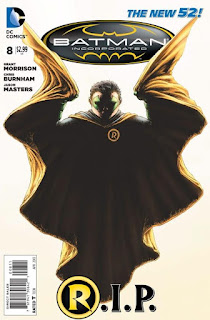 Damn it, Morrison. Right in the feels.

Jason Todd's death happened when I was 12, and even then it felt like a gimmick (with that call-in vote, how could it not?). Damien's death could easily be seen as being equally gimmicky - not to mention easily reversible, given his grampa Ras-al-Ghul's predilection for a nice reviving Lazarus Pit soak - but I give Morrison more credit than that, since this does feel like the culmination, or at least the set up of the culmination, of the story he's been telling since Batman and Son.

We've seen real growth in Damien in that time, from Morrison and others (I loved how Bryan Q. Miller used him the Steph Brown Batgirl book, for instance, which is one of the first places I remember seeing him starting to occasionally act like an actual kid), and going from stone cold killer to a kid pleading for his parents to stop fighting, and who legitimately believed his mother wouldn't let him get killed, well, that's a hell of an arc.  It's also a powerful underscoring of the fact that Batman's world will always be tragic.

It's a sad ending for a great character (no matter if it's certain, probable, or even just potential), but - and this can't be stated enough - it serves the story because it is an event that happens in the story, not the point of the story.  But for once, I kinda wish it could be gimmicky.  Gimmicky is easier to undo.  I like the kid, and I don't want this to stick.  If it does, I hope we at least see how this affects everyone in Batman's world. Batman and Nightwing will be obvious places to see this (Nightwing especially... oh, man, I loved reading Dick and Damien together, and they had such a great final stand together here) , and Batgirl, too, but how about even Worlds' Finest? Damien and Helena met and bonded a few issues back, seeing as how they're half-siblings a universe removed.  She has already lost so much... how will this hit her?

And, of course, this makes me wish we had Stephanie Brown still around all the more.  She was the one who was actually teaching Damian to be a kid, and they had a very complex relationship.

Damian was, in all likelihood, created with a definitive end point in mind.  While I can't say he was my favorite Robin (that would be Tim), he was a great character, and I hope that in death he continues to serve stories to come as well as he did in life.
at February 27, 2013
Newer Post Older Post Home