Avengers vs X-Men is probably better than it should be and that's perfectly okay. 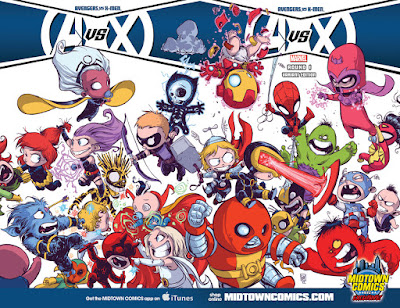 The dull, joyless slog of Infinite Crisis killed my interest in following event comics on a monthly basis, and the heavy-handedness and/or missed opportunities of Civil War, Secret Invasion, and the like led me to pretty much giving up on them in collected form, too.  But the now-running Avengers Vs. X-Men series... I dunno, man, maybe I was still on a high from the Avengers movie, maybe the word of mouth was interesting me, I'm not sure, but a few weeks in I decided I had to cave and check it out.  And now I'm caught up with issues 0 through 3 and the first part of the Vs. spin-off that just showcases specific fights, and I'm pretty much in.

I think what I like best about this is that even though I do think the story is good, and I like the ideological stand-off between Captain America and Cyclops in this (and that neither is handling things as well as they probably could or should), what I actually respect the most is the unabashed way in which the company is admitting that this story is all about This One Story and the Fight That Drives It.  No awkward political overlays, no BS attempts to "change the Marvel Universe forever" that everyone knows will never take... it's just "let's get our coolest toys out of the box and make 'em fight."  Sometimes that's not such a bad thing.  It's certainly the main reason why most Marvel fans of my generation still enjoy the original Secret Wars even though it is, at heart, a pretty thin story.  But it was big, it was fun, and it didn't take itself too seriously despite the stakes.

WAY too many tie-ins, though.  No way am I picking up every single Avengers or X-Men title just see the smaller story tributaries.  I might pick a few up in trade if I hear specific ones are good, but we'll see.