The current state of Captain Marvel Shazam got you down? Well, it does me, too, so I did something about it: Shazam-A-Day, a (mostly) once-daily Tumblr devoted to the Big Red Cheese and his various friends, family, and hangers-on. 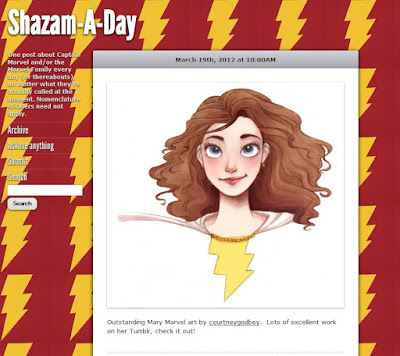 It's light, it's fun, it takes less than a minute of your valuable everyday internet time, it snaffles caps off any size jug, bottle, or jar, and it really, really works.

Shazam-A Day. Won't you?
Speaking of the Captain Marvel legacy, Marvel says that it's now going to give the name to the apparently-soon-to-be former Ms. Marvel, Carol Danvers, in a title next year written by Kelley Sue DeConnick. 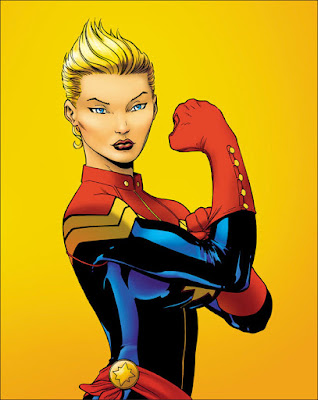 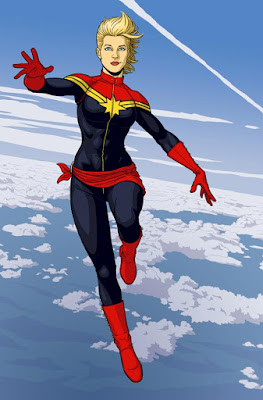 I am really excited about this. I've become a big fan of Carol in the past few years, reading appearances from her original series and more recent book, as well as various Avengers stints. She hasn't always been treated particularly well, but that seems to have changed from about the House of M event on (which, IIRC, was first place she took the Captain Marvel title), and she's even gotten some good exposure in the Ultimate Alliance games, the Avengers and Super Hero Squad cartoons, toys, and the like. She has more than earned the role, so the promotion from Ms. to Captain feels both well-earned and natural (especially considering her military background). And DeConnick is a terrific writer, so I'm looking forward to seeing what she does with the series. My only complaint is that we have to wait until 2013 to get this.
at March 27, 2012
Labels: Captain Marvel, DC, Marvel, Shazam, Tumblr