The digital divide just got a little bit smaller.

I've been hesitant to jump on the digital comics bandwagon. Not that I'm morally opposed to it or anything, I've just always felt a little weird about paying for content I don't physically own, the same-as-cover pricing felt wrong for something so ephemeral, and I only own an iPhone, not a tablet. I've downloaded some freebies (legally, at that), and though the phone-sized pan-and-scan of panels is not my preferred reading method, I don't aggressively mind it (reminds me of those clipped black & white mass market paperback editions of World of Krypton or Untold Legend of the Batman, actually). But I didn't see any reason to buy anything digitally.

Well, Comixology, you finally managed to get me thanks to this little ploy: 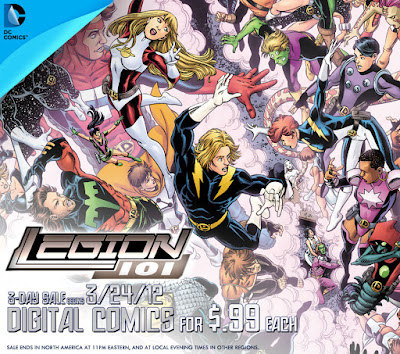 I have a lot of the classic Legion material in reprints, a lot of 70s through the 90s in floppies, and not a lot of interest in the current stuff (I'll get to it eventually, I'm sure, it just doesn't float my boat right now), so I thought I'd pass this by like so many other sales, but I saw that they had LSH #s 124 & 125 and Legionnaires #81, the 3 part Widening Rifts story that bridges Legion of the Damned and Legion Lost, which hasn't been reprinted, and is damn hard to find (and when you do, it's frequently expensive). Then they had Superboy #195, the first appearance of my favorite Legionnaire, Wildfire. And at 99 cents apiece, well, they had me.

And this, I think is a big victory for Comixology, and digital comics as a whole. Admittedly I'm not dead-set against digital comic bookery, but I wasn't a big fan, either. And by giving me a product I want (one I have yet to find affordably in physical format) at a price I was willing to pay, they convinced me to jump aboard despite any reservations I had, and even though I'm only reading them on a phone!

Am I a dedicated digital reader now? No. I'm not going to read all of my comics on a tiny phone screen, the usual price point is, I think, too high for something you won't actually own IRL, DRM annoys me, and I still prefer the look, feel, and size of the physical book overall. But I'm also not unlikely to avoid digital altogether, either, and that's probably a big deal in the long run.

But, seriously, $2.99 to $3.99 for a comic book is stupid enough for a printed copy. For a digital one, it's downright ludicrous.
at March 28, 2012
Labels: comics, digital
Newer Post Older Post Home