A thing of nerdy beauty is a joy forever (or, I now own one of my Comics Holy Grails and I am happy dancing like you would not believe.)

I'm not a big collector of original comic art outside of convention sketches. Not because I don't enjoy it, but because it's usually a pretty pricey proposition (come to think of it, convention sketches are getting pricey, too, which is why I tend to get most of my sketching done by small press indie artists these days... I don't deny artists the right to ply their trade for the opportunity to pay their bills, but at the end of the day, I need to pay my bills, too). I used to own a great John Byrne Avengers West Coast page, but it wasn't anything I was attached to, so when I had to sell it to pay for car repairs or something about 10 years ago, it wasn't the end of the world.

That isn't to say that there aren't original pages I wouldn't like to own, though. There are about a dozen or so I can clearly remember seeing and thinking "now THAT is something I'd love to have on my wall." Well, I got home from work the other night to find that my wife had surprised me by getting one of these for me, Page 23 Tales of the Unexpected (2006 series) #5, the first page from that issue's chapter of the Doctor Thirteen story "Architecture and Morality," drawn by Cliff Chiang. 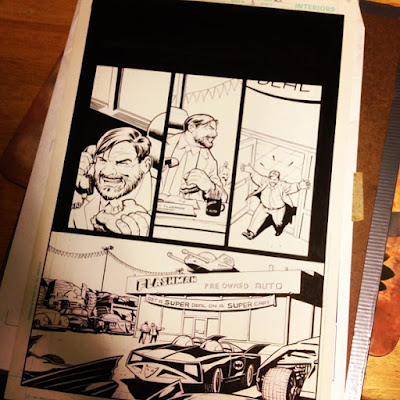 The story, if you've never read it, is a brilliantly metatextual work from Chiang and writer Brian Azzarello about the state of DC Comics at the time and, shall we say, less popular character concepts' places in their publishing stable (though Traci Thirteen got pretty popular following the story, I... Vampire's Andrew Bennett has bounced back quite well, and Captain Fear is going to be in that new Walt Simonson graphic novel, but I digress). This page, which as I said begins Chapter 5, was probably my favorite from the whole story. It has almost nothing to do with the story itself, per se, but look at it. There's Funky Flashman, DC's own Stan Lee doppelganger. A whole lot full of Batmobiles from various media. The God Damn Supermobile. Yeah, this was meant for me on an atomic level. And now I own it, thanks to my wife, who is the best wife. Other wives, good though they may be, are #2 or lower. Sorry, folks.

(Another cool thing... when I posted this pic on my Tumblr the other day, Cliff Chiang himself liked it. I geeked out even more about that.)

Inevitably, I got out my Architecture and Morality trade paperback to compare the original to the finished page, and I thought this was interesting (sorry for the crappy pics, I only had my phone handy).

From the original, what I'm pretty sure is supposed to be the version of the Batmobile from Super Friends: 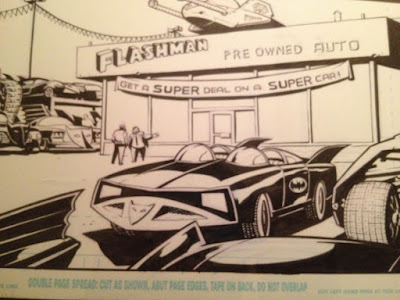 And the same car in the published version: 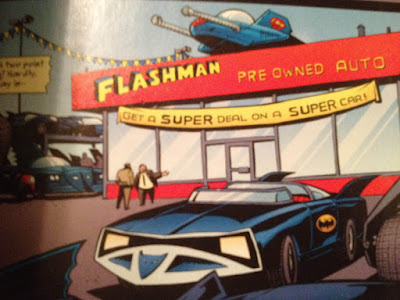 Not a big difference, but noticeable enough when compared to the original. I wonder how come the change? Copyright/trademark issues, or just artistic (or editorial) preference? I may never know, but still, it's interesting to speculate. Are you out there, Cliff or Brian? Any chance you could clear this up?
at February 08, 2012
Labels: Batmobile, Cliff Chiang, comics, DC, Dr. Thirteen, Supermobile

Who watched the Watchmen previous to the watching that chronologically happened later?

So unless you've been living in a hole today, you've probably heard about Before Watchmen, the non-Alan Moore and Dave Gibbons Watchmen prequel, by now

Like most people of a comic reading inclination, I like Watchmen a whole lot. But I've never had any desire for a continuation of the story in any direction, prequel or sequel. It stands alone, it says exactly what Alan Moore and Dave Gibbons wanted to say, and it does the job damn well. The idea of getting more of that world, especially from different creative minds, never sat well with me. But mostly, I just wasn't interested. In fact, there are only a handful of names that would arouse my curiosity enough to make me check out anything like this. 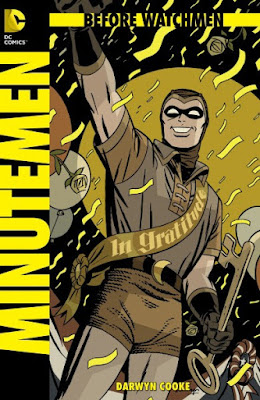 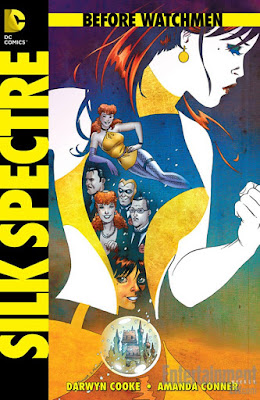 Yeah, Darwyn Cooke and Amanda Conner are both in that handful, particularly thanks to the idea of them working together. Points to DC for generating interest in me where previously there was none.
at February 01, 2012
Labels: comics, DC, Watchmen
Newer Posts Older Posts Home
Subscribe to: Posts (Atom)