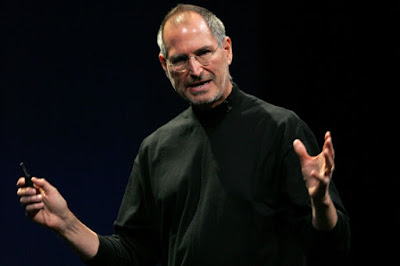 I was never a big cult follower of his, but he was the sort of guy where I could see EXACTLY why he had such a cult following. A lot of the innovations for the Mac, like the graphical user interface and the use of a mouse, were actually pioneered by the guys at Xerox PARC, but Xerox never wanted to do anything with them for fear of diverting resources away from their copier business (oops). Jobs was smart enough to see that they were onto something, and brazen enough to use it. A lot of people will call him a visionary. I think that's a fair assessment.

And Pixar. Pixar started as a division of ILM, but George Lucas sold it off because he didn't want animation diverting resources away from his special effect business (oops). Thanks to Jobs' drive and his willingness to let some insanely talented filmmakers use the technology to tell their stories (and show off just what that technology could do in the process), movie making was changed forever. Not just animation, mind you, but movie making.

And then, of course, there's the i... well, iEverything. iPods, iPhones, iPads... they've gone from fancy toys to absolute ubiquity in about 10 years. Name another device type that has been adopted so universally, so fast.

So long, Steve. Thanks for it all. I get the distinct impression you were a damn hard man to work for, but I can't argue with the results. And also, thanks for responding to my group member's email when we did a project on Pixar for that multimedia class I took back in college. Your response was the very model of conciseness, but you answered our questions and gave our presentation a hint of that allure that only a brush with celebrity can provide. We appreciated that.