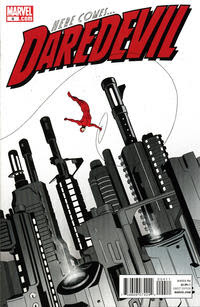 Haven't done one of these in a while. I've been reading comics where and when I can, but with grad school, it's hard to keep up on everything, and most of the rest of the inter-ma-webs have already long since discussed and digested these (particularly the DC New 52 books), so these will mostly be just brief reactions rather than reviews. Maybe a little SPOILERY, too, so you've been warned.

Daredevil #s 2 -4 - Loved the first issue, as I said, and it continues to stay excellent. Mark Waid, Paolo Rivera, and Marcos Martin are just killing on this one. The fights with both Captain America and Klaw were both cleverly written and amazingly depicted, and really, they're both the perfect opponents for DD on two different levels, so I'm surprised he hasn't tangled with either of them more often. I also enjoy the new status quo for Matt Murdock's legal career, and I'm looking forward to seeing where that goes. Top of the pile material whenever it comes out, and I never thought I'd say that about a Daredevil book.

Moriarty #s 1-4 - No shortage of Sherlock Holmes-related comics in the past few years, but this is the best of the bunch by a long shot. It's an interesting take on Professor Moriarty - broken and beaten, but determined to get his empire back, even if it takes a little anti-heroing along the way (though only because it serves his purposes). Writer Daniel Corey, like many non-canon Holmes writers, gets out as many of the toys and characters as he can fit into the story, but they're used well and not just there for set dressing. There's a twist at the end of #4 that I kind of expected, but it's delivered in a way that I was not expecting and it floored me as a result. Read this, people. Read the hell out of it.

Action Comics #1 - Better than I was expecting, yes, but still not the sort of thing I feel the need to follow every month. Especially not at $3.99. Superman-as-working class hero does seem interesting, and there are some hints at the new status quo that I'm curious to see unfold, but I can wait for the trade on it.

Animal Man #1 - This I'll be buying regularly. Jeff Lemire's story hit all the right beats for me, blending Buddy Baker's home life, superheroics, and downright creepy creepy creepiness at the end. And the Believer interview that opened the book was a clever exposition trick. Travel Foreman's artwork took a little getting used to at first, but once the creepy creepy creepiness set in, I realized he was the perfect artist for the job.

Demon Knights #1 - Even though I loves me some Paul Cornell comic bookery, I was wary of this because I hate the Demon. But he, as well as the rest of the cast, are used brilliantly, and I'm anxiously awaiting the next issue. I was wrong to doubt Paul Cornell. The Magnificent Seven in a D&D setting featuring characters from the DC Universe? Of course I shouldn't have doubted him!

Batman #1 - Simply put, everything I look for in a Batman book. Some detective work, some creative face kicking, gadgetry, Gordon and Bullock, Batman actually using his Bruce Wayne public mask to do some good... yes, definitely. More, please.

Batman Incorporated #8 - Wow. Not a good note to end the book on, guys. Ugly, confusing, utterly skippable in every way (sort of like that all-text Joker issue of the regular Batman book that Morrison wrote a few years back). Reminded me entirely too much of Batman: Digital Justice, and not in that nostalgic "oh, remember when that looked mind-blowingly ahead of its time?" kind of way, more like how you look back at it now and wince.
at September 27, 2011
Labels: Animal Man, Batman, comics, Daredevil, DC, Grant Morrison, Marvel, Moriarty, Paul Cornell, Readin, Sherlock Holmes, Superman