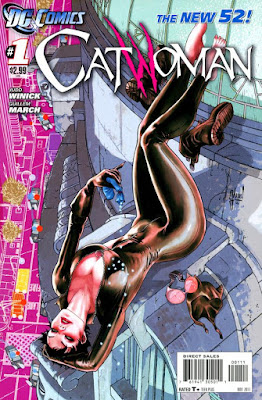 Okay, all the talk here and elsewhere led me to actually pick up Catwoman #1 at my LCS today. And actually, I didn't think it was too bad. I don't believe Selina wasn't written terribly "out of character, per se,at least not based on what I've read in the past (admission: I've read very little solo Catwoman), just more like the thrill-seeking sneak thief of older versions than the "Robin Hood with a fantastic bottom" we've had for the past decade or so. She's the bad girl, she's pretty irresponsible, she's not above using anything at her disposal to get what she wants, and you'd do well not to cross her. I can see why this didn't appeal to the people it didn't appeal to, but as for me, I may actually give this a second issue. Emphasis on "may."

That Sex Scene... it was garbage, put in there (and in the way that it was) just for puerile shock value, and if I don't pick up issue two, it's because an otherwise decent story was sidelined in the last few pages by scene that just screams "Shit is EXTREME, yo!!! They shud call thiz LOLCatwoman becuz Batman's all like 'I CAN HAZ FURBURGER?' HA HA HAHAAAAA ROXXXXORRZZZ!!!1!!1 Hey where's my Ed Hardy shirt, bro?"

Yeah, I can see why that pissed so many people off. Doing "sexy" in comics is difficult no matter the genre, and with superhero comics its even tougher still. It works in something like Empowered, where it's done with fun and a surprising amount of heart. Here, though, not only is it really out of place, but at best it's forced, and at worst it's... well, pretty much what we got. Le sigh.

And, also, if I can be all That Guy for a moment, that's pretty flimsy body armor Bruce is wearing if Selina can pull it up his chest like it's a sweatshirt. And his abs have abs! Given that I liked the art in the rest of the issue, I was asking why reality and anatomy suddenly went out the window in the final page. Beside the point with content of the scene and all, I know, but still, it bothered me.
at September 28, 2011
Labels: Batman, Catwoman, comics, DC, Readin
Newer Post Older Post Home