Justice League #1: meet the new boss, who so far is not noticeably different from the old boss. 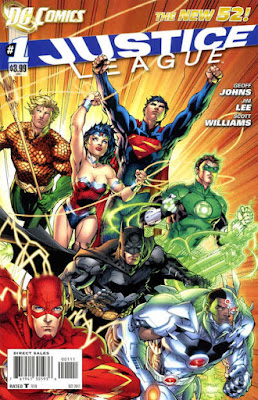 This will probably sound funny, but it didn't matter to me whether I loved or hated Justice League #1. I just wanted to have a strong reaction one way or the other. As it happens, this first issue was pretty good, which was sort of my problem with it.

This re-boot/launch/start/whatever is kind of a big deal, as major company superhero comic bookery goes, and it should really start off like an explosion, energizing reader minds into thought and action, whether positive or negative. Geoff Johns and Jim Lee, however, put out a decent comic book, which I suppose is something of a big deal considering I've never been the biggest fan of either man's work. The story of how this particular version of the band gets together kicks off well-enough, has a few fun character moments, leaves us to ponder a few questions, and starts off the whole storyline with enough happening that you get a good amount of story going on without it feeling like it's just padding for the inevitable collection.

But still, there's not a whole lot of "wow" here, or at least not enough. For a kick off of this alleged magnitude, merely decent isn't really enough.

I'm curious to see where things go from here (though I'll probably wait for the collected volume to hit my local library), and I'm looking forward to some of the remaining 51 first issues we've got headed down the pike to us this month (like Frankenstein, Aquaman, and Mr. Terrific, to name but 3). But even though I liked Justice League #1 alright, the new 52 didn't kick off with a bang, nor even a whimper, more of a "that happened."