Friday Favorites: The Elongated Man (and Sue, of course) 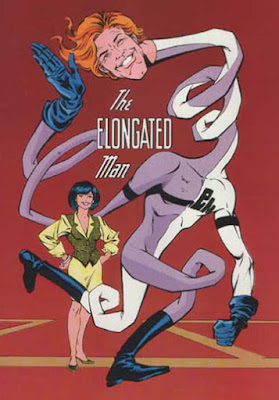 Ralph Dibny, a.k.a. the Elongated Man, and his wife Sue Dearborn Dibny. Adventurers. Globe trotters. Bon vivants. Detectives. Essentially, The Thin Man's Nick and Nora Charles except one of them is a stretchy superhero and they don't have a dog. And fun as hell.

If you read superhero comics, you know DC spent the last few years being very, very unkind to the Dibnys. Bad, bad things happened to Sue, all in the name of giving other heroes something to react to, and then she died (well, actually, she died first, with the bad, bad things being revealed via after-the-fact retcon, but whatever). Ralph moped around a while, got some measure of justice for her death, then died, too. We got a quick hint of a post-mortem silver lining for them as ghost detectives (or, really, detective ghosts), then nothing. Probably because after all the grimness they had been through, trying to rework them as "The Thin Man by way of Topper" was too much, and too late.

However, as they're quick to remind everyone, DC's running a whole new (or at least really, really revised) ballgame right now. Some of the old continuity remains, a lot of it seemingly doesn't. Seems to me that some of the more unpleasant bits could easily be swept under the rug, don't you think?

Come on, DC, give us back Ralph and Sue. Alive, well, and fun as ever. You're all about diversity of titles, and I think a light-hearted, globehopping superhero detective book is something that has been sorely lacking for a good long time.
at September 09, 2011
Labels: comics, DC, Elongated Man, Friday Favorites, New 52
Newer Post Older Post Home