The Protector: not Robin, but the 5th next best thing

The November solicits for DC are up in all the usual places (here, for instance), and what to my wondering eyes should appear but this solicitation for Tiny Titans #46: 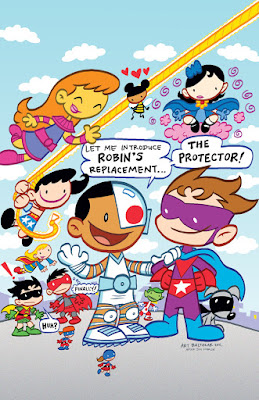 TINY TITANS #46
Written by ART BALTAZAR and FRANCO
Art and cover by ART BALTAZAR
On sale NOVEMBER 30 • 32 pg, FC, $2.99 US • RATED E
What happens when Robin is called away on a secret mission with Batman? The team will need a replacement! Enter: The Protector! Will he be welcomed with open arms? Or will someone like, say, Talon, have something to say about it? And where does Nightwing fit into all this?

Well, this made me weirdly happy. If you don't know, the Protector was a character who appeared in three special issues of The New Teen Titans co-produced by DC, the Presidential Drugs Are Bad M'kay Council (or, you know, whatever it is that was actually called), and various corporate sponsors. One of those sponsors was Keebler. One of Keebler's competitors, Nabisco, had the licensing rights for Robin, so he had to be replaced by our boy the Protector here (so sayeth Marv Wolfman and George Perez).

Anyway, I remember these comics being a pretty big deal at the time (they even managed a write-up in The Mini Page, the newspaper insert kids' supplement of record in the early 80s), and they were EVERYWHERE. I even remember we read this one: 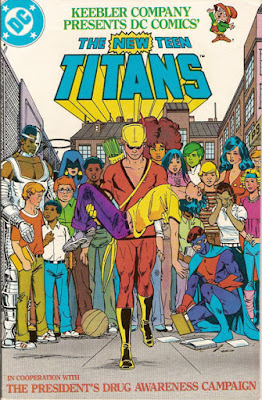 out loud as a class in second grade as part of our nascent, pre-D.A.R.E. anti-drug educational time. And even when you're only 7 or 8, reading comics for class credit is awesome. It didn't hurt that it was actually a pretty decent story as these things go. I remember everyone in class was floored by the revelation that Speedy had once been an addict, even if none of us knew who the hell he was at that point.

(Funny thing, though... even though we read these in class, they never actually gave us copies. We had to hand them back. Seems like it might have been a better education tool if we had actually gotten to take these home. Might have led a few more kids into reading comics, too. I'm just sayin'.)

But even though I had never read New Teen Titans before this point, I knew from house ads in other DC books that the team was led by Robin, so this new guy, who even then I realized was probably just a redrawn Robin, was a bit of mystery to me. Only a bit, though, since he had no real character of his own... our boy the Protector is pretty bland, and probably intentionally so, since if they couldn't make him Robin, why make him cool? Hell, he's almost shunted aside completely in favor of Speedy in the above issue, as I recall.

But still, as a mostly forgotten (wisely or otherwise) bit of DC lore, a guy whose only other appearance was a Who's Who Update 1987 entry, he's got curiosity value going for him, and I can't wait to see how Art and Franco manage to drag this particular also-ran out of the cold.