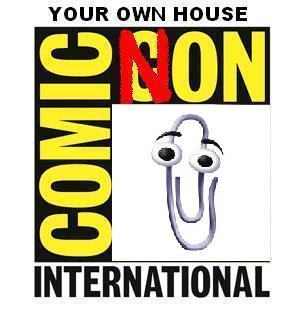 Once again all of us here at Trusty Plinko Stick World Headquarters have been left home alone and dateless for Nerd Prom out in Sandy Eggo, so we're left to console ourselves with our own non-con for third year in a row. It won't be nearly as exciting, and given the heat wave gripping most of the country, it'll probably end up being even more sweaty than the real thing, but there won't be as many people, you won't be scrambling to find affordable food, and it'll be way cheaper.

How does it work? However the hell you want it to. Talk about your favorite nerdities with your friends. Buy some comics. Watch some movies. Draw something. Drink some beer. Argue about superheroes. Argue with superheroes. Wear a costume. Don't wear a costume. Hell, don't wear pants. It's your house, it's your rules, it's your game show.

As for what's going on around here, well, it's Preview Night, so it's a little slow. But the kiddo already found a few cosplayers: 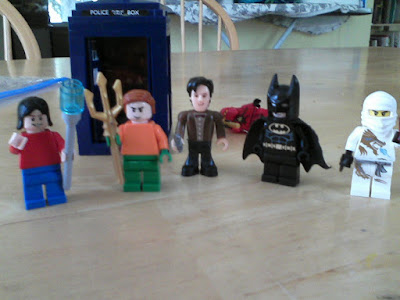 The kid on the far-left says he's supposed to be Aqualad, by the way. A good effort, but we recommended next year he wear his shorter blue legs instead. Awesome TARDIS costume on that one guy in back, though. Bet that's hard to walk around in.
at July 20, 2011
Labels: Aquaman, Batman, Comic-Non, cons, Doctor Who, Ninjas