There's new DC superhero Pez and nobody told me? 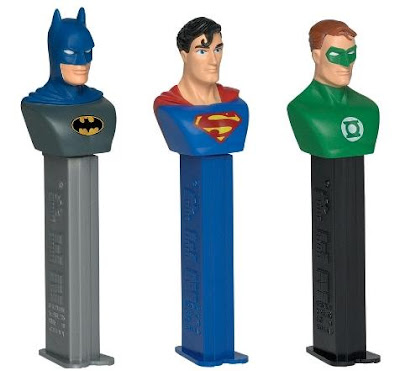 You're supposed to stay on top of this sort of thing for me, internet. What the hell?

Anyway, I discovered these the other day when I was at Toys R Us with my son. We were standing in the checkout line, and there in the Pez display was Batman. While the apex of my Pez collecting days is behind me, I still try and pick up the nerd-oriented ones when I can, so I grabbed this and was excited to find out on Pez.com that there are Superman and Green Lantern ones to accompany it.

It was surprising to see Batman, seeing as we just go a new set of Batman dispensers a few years ago, but seeing them go with the bust design like they've been doing with the Disney princesses was a good idea, because it finally opens them up to characters who they've never been able to do before. I mean, I suppose they could've made a Superman at some point in years past, but it would've just looked like Generic Black Haired Man.

They should've done this years ago, and I hope they continue. I'm looking forward to seeing who we get in this format down the line, because although this is a good enough start, it's a little skimpy right now. Of course they'd put out a new Batman, and finally making a Superman is a good idea, too. And since Green Lantern had a movie this summer, he's also a no-brainer. But they couldn't have made a new Wonder Woman, too? She has brand recognition far beyond the comics-reading world, and her old dispenser has been off the market for years. And, of course, Batman can always use a Robin.

Not that I'm complaining mind you. New superhero Pez is always a good thing, and I figured the new Captain America and Thor dispensers were all we'd be getting. This is a big ol' windfall for even semi-retired Pezheads like me.
at July 24, 2011
Labels: Batman, DC, Green Lantern, Pez, Superman