Happy Independence Day from The Shield 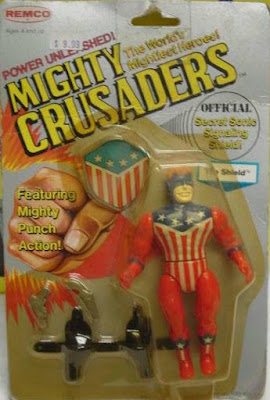 Hello, friends. I'm the Shield, an action figure from Remco's 1984 Mighty Crusaders toyline and, yes, the very first patriotic superhero ever (look it up!), and I'm back at the Trusty Plinko Stick weblog internets site once again to wish each and every one of you a Safe and Happy Independence Day! Be careful with those sparklers, kids! Ha ha! 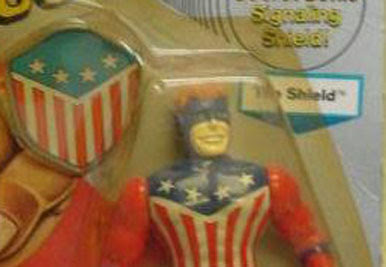 What? No. I don't want to talk about... you know... him. Why do you always have to bring this up? My therapist says I need to move past all that, and I keep trying, and yet you ALWAYS... 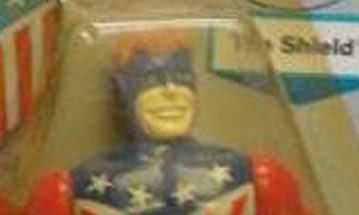 Look, I'm sorry. I don't mean to yell. It's not your fault. Listen, I get it. There's a movie coming out, so he's on TV, he's in the magazines, he's on Dunkin Donuts cups... he's even got his own signature donut! Man, if that's not makin' it big, I don't know what is, Sonny Jim! 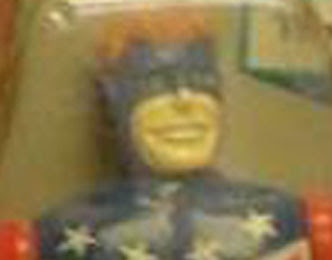 And the thing is, he's such a nice guy! AND THAT'S WHAT'S WORST OF ALL!!! It'd be one thing if he'd just be a bastard, but he's just this amazingly friendly, upbeat guy and I cannot bring myself to hate him. It's all "Okay, Axis, here we come!" and "Avengers Assemble!" and "Keep 'em flying, soldier!" and "Look, here's a hundred dollars, just take it... no, it's not charity, it's a loan, you just pay me back whenever you can, I know you're good for it, and no, the Comet will never hear about this, this just between you and I, okay?" with him. I guess I don't blame him, not anymore. I've finally learned to stop thinking he stole my shtick - it's not like draping yourself in a flag is a particularly new idea - and to stop thinking he got lucky. He's a hell of a guy who made the most of the breaks he was given and has prospered as a result. Deservedly so. And that shield-throwing thing is hella cool, as I'm led to believe the kids say. Heck, I plan on being first in line on opening day to see that movie of his!

And I will likely have been drunk for some time. Oh, God, I hate myself.
at July 04, 2011
Labels: holidays, The Shield, this got darker than even I was planning, toys