DC: everything old is new again, except for the stuff that isn't (I think).

The more I read about this whole DCnU thing starting in September - you know, the rebooty retcon that isn't actually either one of those things except for all of the reboots they're retconning (or is it retcons they're rebooting?) - the more I'm deciding that a lot of it Just Isn't For Me. All those things they have planned for Superman, for instance... 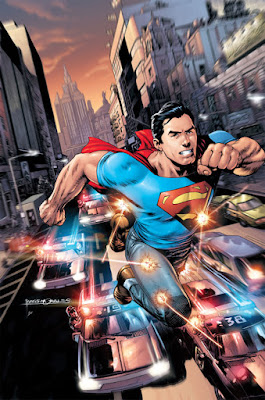 yeah, I'm all set. Parts of it feel like yet another retread of well-worn territory (all of his many parents dead, no longer married to or even dating Lois), and the parts that are changing just feel like change for change's sake. And based on what I've seen and heard so far, I don't really like the new stuff (particularly the costume... what we see above doesn't really work, at least not with the cape, and the armor he'll eventually end up in is just ugly), and if I want the well-worn territory stuff, I'll go back to the old comics.

And it's that last bit that I think is keeping me from going all Fantitlement Rage on this. I can't get too upset about any of this - none of us can, really - because there are nearly 75 years' worth of Superman comics out there, and I sure as hell haven't read all of them. I probably haven't read even remotely close to most or even half of them, and I consider myself a big Superman fan. With that much material out there, none of us can complain that there aren't comics that appeal to our particular vision of Superman (or whomever) out there. And with so much classic material in print again, it's easy to get ahold of it.

So yeah. Not For Me, but I won't lose sleep over it.

Kind of sad to see so many great books get bulldozed over to get this going, though. Take Bryan Q. Miller's Batgirl, for instance. 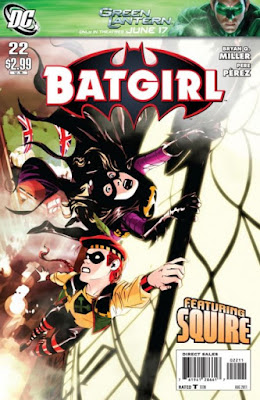 I've only read 3 or 4 issues of this now, but I've decided it's incredibly fun and I'm going to start tracking down the issues or trades of the ones I've missed. The issue I posted above, last month's, I believe, was one of the most fun comic book stories I've read in a very long time. It had my attention anyway, since I've been a huge mark for the Squire ever since Grant Morrison first teamed her up with Batman in his JLA Classified arc, but this was an absolute blast to read, it officially made me a fan of Stephanie Brown (a girl who just cannot catch a lasting break with DC, can she?), and it proved that you can, indeed, have a book set in Batman's sandbox that can be a decent adventure and mystery while still being - SHOCK! GASP! EXCLAMATION POINT! - fun.

Again, I have a lot of these left to read now, and I should be able to track them down, so I have that to look forward to, but it's just too bad that there won't be still more of these to enjoy. That's a real shame. I look forward to the fun reading to come, but I know I'll be out of it all too soon.

Of course, the upcoming change isn't all bad. Despite my reservations about the big guns, some of the "smaller" titles coming down the pike actually have me quite excited. Mr. Terrific, for example, sounds interesting. I was enough of a fan of the first Blue Beetle series to be curious about the new one. And Legion Lost looks to feature my favorite Legionnaire, Wildfire, front and center, so I'll give that a look. But the one I'm looking forward to the most is one that we actually seem to be getting a sneak preview of right now, and that's Jeff Lemire's Frankenstein: Agent of SHADE. 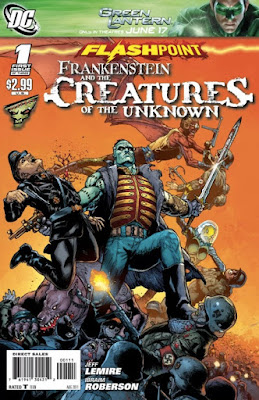 Now, I have no interest in the main thrust of this whole Flashpoint event. At all. I'm not opposed to it, mind you, but based on what I've heard and skimmed, it's mostly not my cuppa (though, admittedly, I *love* the series' take on Captain Marvel/Thunder, the whole S!H!A!Z!A!M! thing). But Frankenstein and the Creatures of the Unknown caught my eye because a.) come on, Frankenstein and a big sword; b.) it co-stars the Creature Commandos and the G.I. Robot; c.) Jeff Lemire's a talented guy, even if I don't always like what he's working on. So I gave this a shot, and two issues in, it's fantastic. It's the best sort of peripheral event tie-in in that it only barely ties in, so you can read this and mostly make sense of it even if you're not reading Flashpoint (and, I suppose, if you're reading Flashpoint and have no interest in this, you can safely skip it, but seriously, don't). The plot's interesting, the characterization is great, and there's so much What the Hell?!? going on that by the time you've begun to process the last crazy thing that happened, some other nutso thing is going on. It's Fun Comics of the highest degree, and though I've mostly given up on monthly floppy funny books, I'll probably give the Frankenstein ongoing a shot.

The New Old Nu DC: there's probably no stopping them now, but in some cases, that's probably an okay thing. As for the rest, well, like I said, there's 75 years of other material to read instead. Keep that gravy train chugging, DC, and we'll continue to get along fine.

(Oh, and obviously, I'm more than willing to be proven wrong on all this. I'll be happy if the new Superman, and everything else, is awesome. If it turns out that it is good, I'll definitely give it a shot. But for now... wary.)
at July 18, 2011
Labels: Batgirl, comics, DC, Frankenstein, monsters, Superman