The Importance of Being Cyborg

(Full disclosure: this is a slight reworking of a message board post I wrote a few days back, so if it seems even more clipped and hackey than usual, there ya go.) 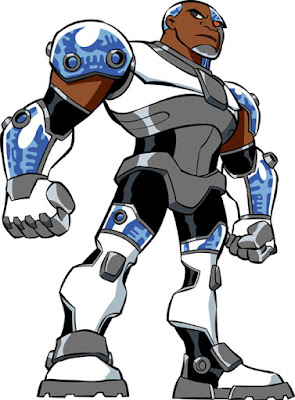 So as we've all seen by now, Cyborg is going to be one of the members of the new Justice League when the book restarts in September. Being one of the three original characters to come out of New Teen Titans, he has always kind of stood out.

He was a Super Friend in the last season or two of that show.

He got made into a Super Powers figure.

He was very clearly a stand-out character on the Teen Titans cartoon, even considering the small recurring cast it had.

He was one of the earliest DC characters adapted for Smallville.

He never made it into the Johnny DC Super Friends comic that I can recall seeing, but he was added to the toyline and some of the kids' books.

Based on the pegs at Target, they made a TON of his DCUC figure.

Haven't been reading it, but it looks like he has a big role in Flashpoint.

So what is it about Cyborg that has led to this rise in status? I think his TV visibility certainly helps, but I think there's more to it than that. I think the biggest thing he has going for him is that he is very likely DC's highest visible character of color who is not a new or alternate version of a legacy character, and neither his name nor his powers have any sort of connection to his ethnic heritage.