How's Who #10 - Doctor Who: The Television Movie 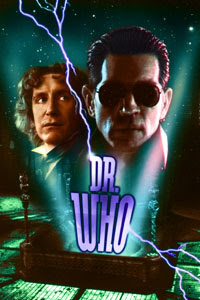 The Plot: Okay, try and keep up. The Master is tried and EX-TERM-IN-ATED by the Daleks (wait, what?), and his last request is that the Doctor (in his 7th incarnation as the story begins) come for his remains and return them to Gallifrey (wait, what?). The oozing, snakelike consciousness of the Master is still alive, though, and he manages to cause the TARDIS to malfunction and crash in San Francisco just before the Millennium. The Doctor ends up getting shot by a street gang as he exits the TARDIS, (wait, what?), since his arrival actually ends up saving Chang Lee, the kid they were trying to kill, and I guess they still had to shoot someone. Dr. Grace Holloway, the heart surgeon who tries to save his life, ends up killing him because she is thrown off by his actually having two hearts. Due to the anaesthetic, though, he doesn't regenerate right away, and when he finally does, he's missing a lot of his memory.

The Master, meanwhile, takes over the of body ambulance driver (as you do), but schemes to take over the Doctor's body and his remaining regenerations using the power of the Eye of Harmony, located in the TARDIS cloister room (wait, what?). He needs a human to do this, though, as the eye is somehow keyed to human retinal patterns because it turns out the Doctor is half human (wait, what?), and so he takes young Chang under his wing in the creepiest, most Eric Robertsy way possible. The Doctor, meanwhile, tries to recover his memories and recruit Grace to help him repair the TARDIS and stop the Master, all before midnight on New Year's Eve, because that's when the now open Eye of Harmony will suck the entire Earth inside of it (wait, what?). Antics, the consumption of jelly babies, motorcycle rides, muchas smooches, and expressions of delight about shoes ensue. 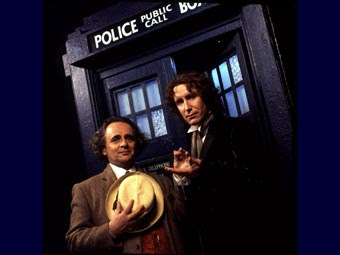 The Thoughts: There's no denying it, the plot of this thing is kind of a mess. But, to be fair, they were trying to do a whole hell of a lot here, and clearly the production's reach exceeded its grasp. When this aired in 1996, the original Doctor Who had been off the air since 1989, and besides the short 30th anniversary adventure Dimensions in Time, done as a one-off special for BBC's Children In Need event (which crossed over with EastEnders... and aired on Noel's House Party... man, there's a whole lot of weird in there), there had been no new Who on TV at all in that time. And sure, the 7th Doctor's travels continued in the Virgin Publishing "New Adventures" book series, but that didn't have the reach that the TV show did. So this movie was an attempt - and perhaps an overly ambitious and sincere one at that - to get the show back on the air.

But beyond that, they were also hoping to bring it up to date for a more modern, "with it" audience... no more shaky sets or visible zippers, and maybe the Doctor could actually *GASP* show a little overt affection for the attractive lady in his company. And as this was also a co-production with the Fox network, they were also hoping to make the show palatable for American audiences, and pull it from the PBS/nerd niche into the mainstream. 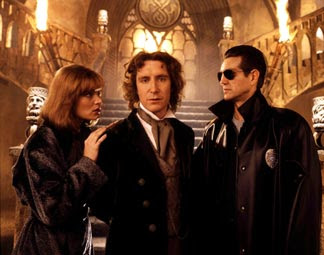 Amazingly, all of this would happen... but in 2005, with the debut of the series helmed first by Russell T. Davies and then Steven Moffat. In 1996, it just wasn't meant to be. Part of it may be due to the fact that it got very little promotion here in the States, and I believe was even pre-empted in many markets. And in the UK, well, it was all just a little too American in tone and scope, what with all the shootings and, frankly, weak attempts at humor. And for the die hard Whovians out there, they just contradicted too much of the established canon... and considering who bad the classic series was in following its own continuity, that's really saying something.

It's not without it's charms, though, mostly due to Paul McGann, who really is a terrific Doctor. His look is generically Edwardian, so much so that he looks more like a vampire than a Time Lord, but his personality is great, and a wonderful counterpoint the master chess player that was McCoy's Doctor, or the brash pomposity of Colin Baker's. McGann's Doctor is genuinely excited about life, the universe, and everything, definitely a guy who wants to carpe every diem he can get his mitts on. And his habit of revealing little hints about people's destinies to nudge them in the right direction reminds me a bit of Patrick Troughton's Doctor; he's not breaking the laws of time, but he is bending them.

And the TARDIS set is amazing, sort of a mix between the wooden secondary console room of the Tom Baker years and the cathedral-like expanse that Christopher Eccleston and David Tennant ran around. It may be a bit too gothic or steampunky for some, but I think it's quite charming, austere, and eccentric, but without being too over-the-top. Definitely the sort of place the later-era "Time's Champion" 7th Doctor from the New Adventures books would have chosen for himself, and it fits 8's style well, too.

And Eric Roberts as the Master? Actually, it's not that bad. He chews scenery and camps it up to the point where even Anthony Ainley might have advised him to dial it back a bit, but hey, the dude has been repeatedly been killed trying to expand his lifespan. That might make him just a bit nuts, enough so that the anger and madness we see briefly in Derek Jacobi's take, and so brilliantly in John Simm's, makes all the more sense. It's not a brilliant performance, but given everything else going on here, hey it kind of works. It's all about context. 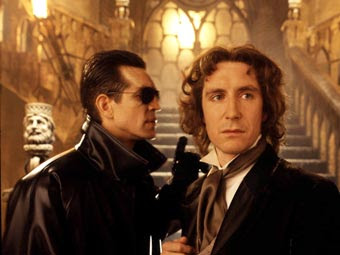 Overall: Whether you like it or not, people, the BBC says it's canon, so it's best to stop fretting about it and just take from this what you enjoy, whatever the hell that may be, and ignore all that which doesn't make sense. Hell, that's what Terrence Dicks did. In the first of BBC Books' 8th Doctor novels, titled The Eight Doctors originally enough, he spends most of the first chapter addressing or outright correcting statements made in the movie (the Doctor wasn't really half human, the Eye in the TARDIS was just a conduit to the actual Eye of Harmony that powers all Gallifrey, etc.), and that's about as official a recommendation to create your own personal continuity as you're ever gonna get.

It's not perfect, not by a long shot, but it is McGann's only "official" appearance in the role (assuming you don't count his many Big Finish audios, the countless BBC novels, and the comics), so enjoy it for what it is, and be happy that no one threw in the towel for good when this didn't take off the way they had hoped.

Apropos of Nothing: There are actually two cast members from the sitcom Less Than Perfect in this thing. Eric Roberts, of course, but also Will Sasso, who plays Pete the morgue guy here, was Andy Dick's one-time bully but then later inexplicably friend of him and the rest of the cast on the show. I wonder if that ever came up on the Less Than Perfect set?

Sasso: "Hey, wow, Eric Roberts! We actually worked together once, kind of. We were both in the Doctor Who TV movie! Remember that?"