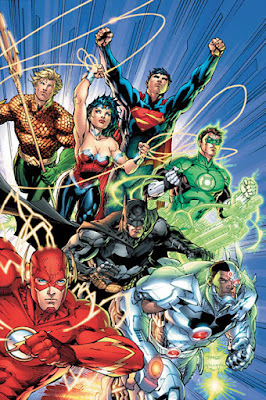 I go away for a couple of days and the whole nerd internet pretty much a-splodes with the news of DC hitting the reset button in September, relaunching their superhero books with a new continuity, new costumes, and new #1 issues. And it's funny, because I've been joking for a while now that these characters have become so far removed from their status as icons (see also: weepy Superman, paranoid Batman, murdery Wonder Woman, rape-as-a-plot-device, etc.) that basically burning everything down and starting over from scratch was the only way to get things back to normal. At long last, they've finally listened to me!

Okay, yeah, clearly I'm not that delusional. But I do think it speaks well for the current crop of management at DC that a pretty heavy hand had to be taken to get these characters back in line. Of course, I say this now. For all I know, the attempts to tie these characters more closely to the real world, to paraphrase the news story, may make them even more rapey, weepy, and ultraviolent. With Geoff Johns and Jim Lee at the helm, it's a distinct possibility. I've never been a huge fan of the work of either person, though they have both produced books that I have enjoyed, so I guess I'm cautiously optimistic on the whole, though maybe more the former adjective than the latter.

I kind of hate most of the redesigned costumes up there, though. Aquaman looks alright, and Batman looks mostly unchanged - though, come on, we just got the yellow oval logo back, and they're taking it away again? - but Superman and Wonder Woman's costumes are terrible, and I don't understand why everyone is wearing a v-neck shirt. Also, does the Flash really need a chinstrap?

On the whole, I'm approaching this with a wait-and-see attitude. Having read comics for about 31 or 32 years now, even the idea of continuity reboot (and trying to figure out which parts of the old continuity make up the new) seems old hat. It might end up being pretty good, it might not, but we won't know until the books come out, so there's no sense in getting uptight about it yet. I guess this means we may need to learn yet another version of the Legion of Super-Heroes now, though, huh? And will this fix the Marvel Family? If so, I'm definitely on board.
at June 01, 2011
Labels: comics, DC, reboot
Newer Post Older Post Home