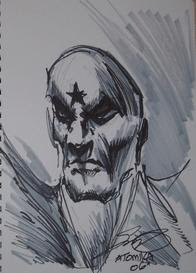 The title character from Atomika: God is Red, as drawn by its writer and artist Sal Abbinanti, who has to have one of the coolest day jobs around: comic art dealer. If you've seen the Alex Ross Art booth at a convention, you've probably seen Sal... he's the guy in the nice suit. And he's a hell of a nice guy to boot. Sal drew this for me back at the one Wizard World Chicago I attended back in 2006. He had some choice words for Gareb & Company for sitting the Alex Ross booth back behind a wrestling ring, a skateboard ramp, and the loud, loud, LOUD Spike TV booth.