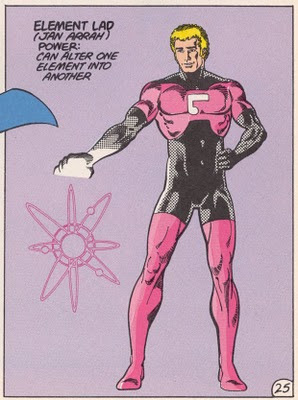 I've been picking up the 1980s Paul Levitz-written issues of The Legion of Super-Heroes these past few years, and though a lot may change over the course of the chunk of issues I've read, one thing remains pretty constant: Element Lad's kind of a douche.

I'm sure a lot of it stems from his power. I mean, read that description above: "Can alter one element into another." They might as well come out and just say "can pretty much turn anything into anything else," because that's what happens time and again. Various Legionnaires have all kinds of powers that laugh heartily in the face of physics, but changing the physical properties of things on the molecular level, therefore turning them into other things? Yeah, that's pretty huge right there. Godlike, even, which Dan Abnett & Andy Lanning used to good effect in the early aughts, but I'm getting ahead of myself here. Anyway, what I'm trying to say that if you were basically a living, breathing alchemist, with the power to basically make any form of matter your bitch, you'd probably start copping an attitude.

So I'd read these, and I'd wince whenever Element Lad came on panel to complain. Eventually, I started rooting for him to get his comeuppance, and I'd cheer when he did. Soon enough, I'd start hoping he'd show up in issues just so he could maybe get a little due payback, and I'd be disappointed when he didn't even appear.

That's when it dawned on me that Element Lad somehow became one of my favorite Legionnaires. The guy has an almost Bobby Heenan or Roddy Piper-like quality in my eyes, the sort of character you want to - have to! - boo and jeer, but at the same time, you want to see him show up because he's just so much fun to boo and jeer. He's the guy you absolutely love to hate.

And considering the Legion of Super-Heroes made its reputation by being almost professionally mean, conniving, and downright bitchy to one another for 50 years, that's really saying something.
at May 11, 2011
Labels: comics, DC, Legion