Quick, potentially spoiler-filled reactions to recently read comics and such. Read on, but be wary. 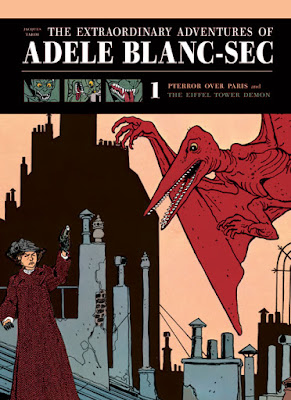 The Extraordinary Adventures of Adele Blanc-Sec Vol. 1: Pterror Over Paris & The Eiffel Tower Demon – I read the first story of Jaques Tardi’s adventuress in back issues of Dark Horse’s BeDe anthology Cheval Noir and just couldn’t get into it. There was a kernel of something there I enjoyed, but it was mostly impenetrable. I hoped it was just the ink-heavy black & white reprinting of the art and took a chance on Fantagraphics’ oversized volume, and I’m incredibly glad I did. In color and in the proper European album size, these comics just sing. The plots, what with all the double and triple crosses, get a little convoluted, but they move at a good clip and mix the action, intrigue, and humor quite well. Tardi’s Adele is a great heroine, capable without seeming superhuman, vulnerable without seeming weak or wishy-washy, and she doesn’t take shit from anyone. And now that I can actually see it, I can appreciate the art a lot more: it’s definitely evocative of the stories’ time period, but wonderfully modern and expressionist in that way that only European cartoonists can seem to pull off. I’m looking forward to reading Adele’s future adventures, and I hope that Luc Besson’s film adaptation gets a proper U.S. release sometime soon. 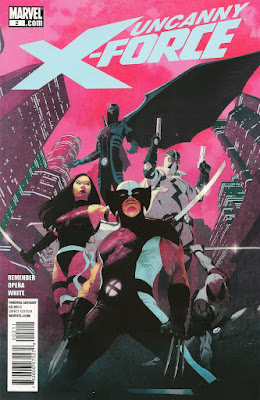 Marvel Must Haves: Uncanny X-Force – Wolverine aside, I’ve never been a big fan of the more “stabby” members of the X-universe, and even Wolverine I can only take in small doses outside of the normal X-Men setting. But enough people I trust were saying that this latest iteration of the badass X-Men offshoot was actually pretty good, so when Marvel released this quickie compilation of the first 3 issues, I figured it was worth a shot. I don’t think Rick Remender is exactly reinventing the wheel here, throwing a more hardcore team up against the latest rebirth of Apocalypse, but I admit he’s not reinventing the wheel pretty well. The team make-up alone makes this worth checking out – we probably didn’t need yet another book starring both Wolverine and Deadpool, but they’re both used quite well (especially, and surprisingly, Deadpool), and when I heard that Fantomex (my very favorite character to come out of Morrison’s New X-Men) was involved, well, I had to check that out. Throw in Angel’s struggles to keep his darker side in check (not as trite as it sounds) and three entire issues without Psylocke ever once mentioning “the focused totality of [her] psychic energy,” and you’ve got a pretty interesting dynamic here. I was skeptical, but I’m curious to see where this goes. 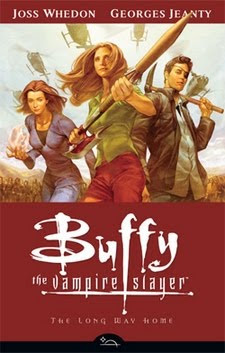 Buffy the Vampire Slayer Season 8 Vol. 1: The Long Way Home - Now, I really enjoyed Buffy the Vampire Slayer back when it was on TV, but by the time it had ended, I was ready to see it go. It had a great run, but a lot of what made the first few seasons awesome had sort of gone away by the end. There were still lots of great moments, sure, but the series as a whole had lost some charm, so it was a good time go out while there was still some charm to be remembered. But the comics mentality of "Stories... must... go... on... FOREVER!" infects a lot of fandom these days, so Buffy got continued as a comic book. I finally gave the first story arc a shot and... yeah, I'm still happy for the series to be a thing of the past. Still lots of decent moments, the characters hit all the right beats, the dialogue even sounds right enough that you can hear the actors saying it in the back of your brainpan, but... the shine's still mostly off the apple, and as many new concepts and familiar faces they present, that ain't gonna change.
at April 07, 2011
Labels: Adele Blanc-Sec, BeDe, Buffy, comics, Dark Horse, Marvel, Readin, Tardi, TV, X-Men