I'm as event fatigued as the next comics fan, but I'm not made of stone, and Marvel knows this.

So this was hanging out amongst the Marvel Comics solicitations for June 2011: 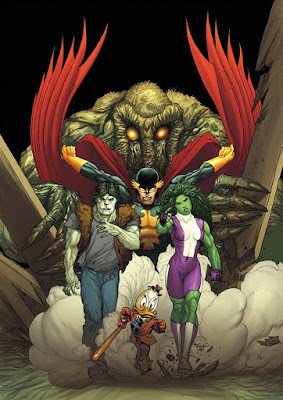 FEAR ITSELF: FEARSOME FOUR #1 (of 4)
Written by BRANDON MONTCLARE
Pencils by MICHAEL KALUTA & RYAN BODENHEIM
Cover by MICHAEL KALUTA
FEAR ITSELF TIE-IN
FOUR MARVEL HEROES SUCCUMB TO FEAR ITSELF!
Do you fear... your protectors turning on you? Man-Thing has gone mad as fear consumes the world, and Manhattan will burn. The only heroes that seek to stop him have given into fear themselves, and no one is safe! Ryan Bodenheim illustrates the dark side of the Marvel universe as a team of monstrously talented artists spotlight Fear Itself, each through the eyes of a fallen hero. Eisner Hall of Famer Michael Kaluta leads the charge, transforming Nighthawk into the most frightening vigilante you’ve ever seen!
32 PGS./Rated T+ ...$2.99

Now, I don't know a damn thing about what this Fear Itself story of Marvel's is supposed to be, and that doesn't bother me in the slightest. However, a story in which She-Hulk, Nighthawk, Frankenstein*, and Howard the Duck fight Man-Thing, and it's drawn by Michael Kaluta? Yes. Please. I need that. I'll take two.

Who says this isn't the Marvel Age of "Can I just give you the money for this right now so as to make it easier on both of us?"

Oh, and also they're going to be collecting the Mark Waid / Mike Wieringo Fantastic Four run in larger trade paperbacks, and those are such awesome comics that it'll be totally worth the money to get them in nice, big, thick volumes, but seriously you guys, this thing.