Last night's posting of Gerald McBoing-Boing sent me on a quest looking through the Tubes of You for more UPA animation gold... some familiar, some I knew through reputation alone (mostly due to Jerry Beck's great book The 50 Greatest Cartoons), and some entirely new to me. And it was too much to not share, really, so I'm making this UPA Week (and retroactively making the Gerald post the "zero issue" of the series, so to speak).

In case you're not familiar, UPA, or United Productions of America, was a studio founded by ex-Disney animators after a strike in 1941, and one that generally broke with the "realistic" style that Disney and the Fleischers, among others, employed. UPA cartoons tended to employ looser, spare designs and limited animation (it wasn't such a dirty word back then), and definitely took a "less is more" approach to their work. They began making animated shorts for the government, and then theatrical ones with Columbia Pictures, and then finally cartoons for television before getting out of animation altogether. And in their heyday, they involved a host of true auteurs, including animators Chuck Jones and Gene Deitch, and writers like Dr. Seuss and James Thurber. They're probably best remembered today for Mr. Magoo and Gerald McBoing-Boing, and maybe even that unfortunate Dick Tracy TV series that barely involved Dick Tracy and instead featured a series of progressively worse racist caricature stand-ins, but their legacy is so much greater. At their best, their animation work was visual jazz.

If you're interested in reading more, the Wikipedia article is probably an okay place to start (standard caveat about Wikipedia accuracy applies, as is the entry at Don Markstein's Toonopedia. 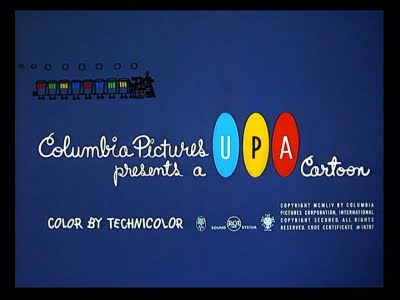