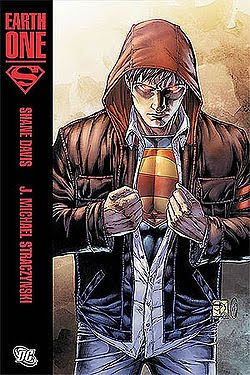 Superman: Earth One - Everybody and their third cousins talked about this online when it was released a few months back, and I don't know how much I have to add that you probably haven't already seen elsewhere. I will say that I thought J. Michael Straczynski's characterizations were pretty good (his Perry White was especially nice, I thought), but the plot was just another Superman fights the aliens story, and the new villains were incredibly generic. I get that he wants to make this fresher and not just the umpteenth retelling of Superman's origin story, but a.) I'd have preferred to see a name villain, especially since there's nothing here Brainiac hasn't done before, and better; and b.) making the Kryptonians the victims of an attack rather than their own hubris totally saps the pathos from their part of the story. I'll stick with the traditional Superman, thanks. 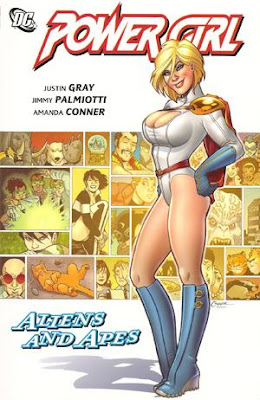 Power Girl Vol. 2: Aliens and Apes - Besides the fact that the subtitle better described the issues reprinting in the first volume, this was just about perfect. Fun, well-plotted, and downright charming, which wasn't something I was expecting at all from this series - or, really, almost any series in the current DC climate - even considering the pedigrees of the writing tandem of Jimmy Palmiotti and Justin Gray and artist Amanda Conner. I dig the life and world built for PG: her attempts at a personal and professional life, her friendship with the new Terra, her rivalries with Golden Age holdovers like Ultra-Humanite and Satanna the Tiger Girl. But most of all I love Conner's artwork. She handles the high action and quiet moments equally well, balances strong and sexy, and has the best comedic timing in comics today. It's a damn shame they all left this book, because like I said the other day, if they all did this book forever, I'd read it forever. 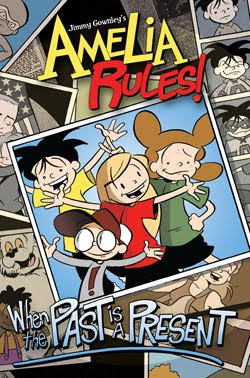 Amelia Rules! Vol. 4: When the Past is a Present - Jimmy Gownley just gets it, you guys. Very little of my childhood resembled anything that Amelia and her friends go through (except for maybe dressing as a superhero at inappropriate times, but even then, I was nowhere near as serious or organized as Reggie is), and yet every word and picture rings true. In this volume, Amelia survives her first school dance, helps a friend cope with her father being sent to serve in Afghanistan, panics at the thought of her mom dating again, and tries to learn her family's history. It's sweet, it's powerful, and more often than not, it's legitimately laugh out loud funny. My 5 year old son was peeking at this when I left it on the table and seemed interested, so I think he's at the age where I can share this with him, and I'm pretty psyched. Also, I'm now dying to play "THANK GOD YOU'RE OPEN!" at local convenience stores. 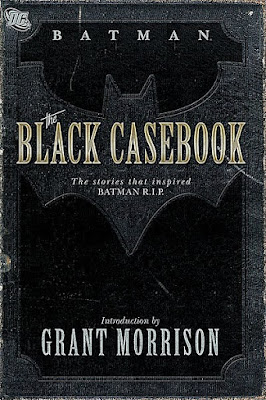 Batman: The Black Casebook - It has come to my attention that there are people out there who don't enjoy the oddball 50s "Time Travel Crimes on Venus" antics of Batman and his associated hangers-on. What is wrong with said people? Do they not enjoy things that are fun? Do they not realize that their steadfast refusal to accept these funny book stories into their hearts helps the terrorists win and/or makes the baby Jesus cry? I just don't know. What I do know is that this book - a compilation of some of the most bizarre stories from the 1950s Batman books (which is really saying something) that Grant Morrison not only took as inspirations for his run up to and including R.I.P. but also made them actually work within the context of modern Batman - is pretty damn awesome, and my only complaint is that it's too short. Please, DC, let's make a continuing series of this! Give me the origin of Ace the Bat-Hound (where they had to give the dog a mask to protect his secret identity!), the various origins of the Superman-Batman team, the time Bat-Mite started to become a cheerleader for Batwoman, and most of all, give me Rainbow Batman!
at January 16, 2011
Labels: Amelia Rules, Batman, comics, DC, Power Girl, Readin, Superman