Having grown up watching Boston UHF/cable superstations, I saw a hell of a lot of Carvel ads growing up. They were poorly made, and the "gargling hot asphalt" voice of the late Tom Carvel really wasn't made for advertising, but they piqued my curiosity all the same. Partially because, come on, cakes shaped like chocolate whales and aliens with a strange acceptance for being eaten are kind of cool, but mostly because there weren't any Carvel stores where I grew up in Maine. And by the time I moved to Rhode Island in my 20s, the one store located here in the Ocean State had closed and was left empty and boarded up for years.

Carvel cakes have remained available in the supermarkets here in RI, though, so I have been able to sample their product sporadically, and I have generally enjoyed it. Having grown up eating occasional Dairy Queen ice cream cakes, foodstuffs so dense and hard that I've seen them laugh off attempts to cut them with restaurant-grade electric knives, my expectations were pretty low, but the Carvel version has generally been pretty good, and admittedly gets extra points for being something you can actually get into with a spoon instead of a flamethrower. But the supermarket cakes were all generic round or rectangle affairs, and maybe the occasional football. The spokescakes like Fudgie the Whale and Cookie Puss eluded us. Until last month.

Armed with vacation time, an un-daredevil take on the bucket list concept, and nothing better to do, Erin and I sought out a nearby Carvel store, and found one just over the border in Connecticut, on the way to Foxwoods, as it would happen, so I'm sure we've passed it before without ever realizing it, and sharing space with a Subway, which was unusual, but clearly an idea whose time has come. We didn't think to call ahead, which would have led to no small amount of swearing if they hadn't been open or didn't have the cakes, but our lack of planning didn't bite us in the ass (for once), and they were both open for business, had plenty of product to unload on us, and judging by the overall lack of people, maybe even a little grateful to have someone to sell something to (a mid-afternoon Monday in December in New England probably aren't the best time and place to sell ice cream, admittedly). There was some debate between the whale and the alien, but in the end, Cookie Puss won the right to come home and find its way into our hungry maws. 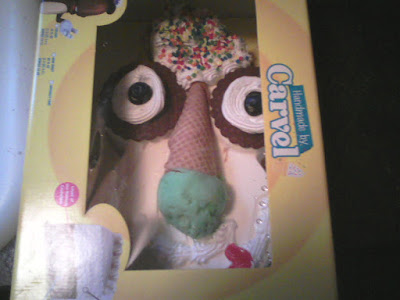 Aside from the minor setback of the nose being pistachio ice cream and not mint like we were hoping, I have to tell you this thing was fucking delicious, my friends. I had been wanting to sink my teeth into one of these for over 30 years, so my expectations were pretty high, but Mr. Puss here did not disappoint (nose excepted). The soft serve and little cookie crunchies in the interior were tasty enough, but bonus sugar cone and two ice cream sandwich eyes? Well played, Tom Carvel, you fantastic dairy-product-makin' bastard, you. The Beastie Boys were right to immortalize this creation in rhyme, or at least co-opt and misspell its name, anyway.

How often do things live up to your lifelong expectations? Pretty much never, people. Cookie Puss was so worth the drive. A tasty part of my own personal pop cultural heritage. Can't beat that.
at January 07, 2011
Labels: Being Dumb, food, travel